A day for green buildings at COP21

December’s 2015 Paris Climate Conference (COP21) will aim to achieve a legally binding and universal agreement on climate that will keep the rise in global temperature below two degrees Celsius. 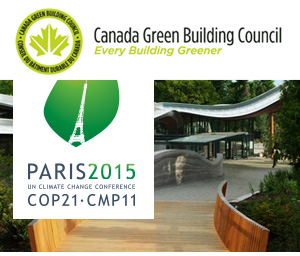 At the Paris Climate Conference, for the first time in the 20 years these events have been held, there will be a day dedicated to looking at opportunities green buildings present in reducing climate change.

“Policymakers are making more of a connection between buildings and climate change than they have in the past, which I think is positive. It’s not just the energy sector. The consuming end, including buildings, has to be part of the solution.”

Canada, the WGBC and COP21

CaGBC’s voice, and other national councils, will be heard through the World Green Building Council (WGBC) at the climate conference.

The WGBC has 74 established, emerging and prospective members, and Canada has been a major contributor since its 2002 inception. It has been aiding the development of younger councils for more than a decade and is seen as a leader within the organization.

The WGBC Secretariat was established in Toronto in 2007 to directly respond to the growing industry interest in green buildings and communities from an international perspective.

Mueller served on the WGBC board of directors for six years until the end of 2014 and Canadian Terri Wills was recently named its chief executive officer.

Canada was just recognized as the top country outside of the United States for Leadership in Energy & Environmental Design (LEED), a green building certification program that recognizes best-in-class building strategies and practices, and Mueller estimates the two countries are close on a per-capita basis.

There are 11,346 LEED credential holders in Canada and a recognized and growing green building sector that employs tens of thousands has been established.

The LEED in Motion: Canada report, recently issued by the United States Green Building Council, highlights the strong growth and innovation taking place in Canada’s green building sector along with a few of the more than 2,200 LEED-certified projects across the country.

Leading up to the conference, the CaGBC is re-emphasizing the importance of the connection between buildings and climate change and how buildings can help reduce carbon emissions.

Thirty to 35 per cent of carbon emissions in Canada come from heating, cooling, lighting and ventilating buildings, according to Mueller, while another 10 to 15 per cent come from extracting, manufacturing, transporting and installing the materials used to construct buildings.

“When you put that all together, there’s a significant impact and a significant opportunity to use buildings to reduce carbon emissions,” said Mueller.

The CaGBC will publish a report about green building market penetration and its economic impact in Canada in terms of gross domestic product, jobs and innovation in September. The first-of-its-kind report will also touch on Canadian capabilities in green building that can be exported to other countries. Mueller will ask the WGBC to share it at the Paris conference.

“The commercial real estate sector and large landlords in Canada, including big companies like Oxford and Cadillac Fairview, are doing a lot to improve the performance of their buildings through LEED certifications, energy benchmarking, and very advanced operational practices and building systems,” said Mueller.

“It’s nice to see that that has been driven voluntarily to attract the right tenants and generate profits.”

Several major Canadian cities have also bought into buildings’ roles in climate change and are trying to be proactive in reducing their energy use, and Mueller expects mandatory energy benchmarking to be introduced in many of them.

But while the Canadian government adopted a LEED Gold policy for all of its buildings over a certain size several years ago, Mueller says federal climate change policies have been lagging behind other countries.

If the CaGBC and its partner councils have their way, that could change after the Paris Climate Conference.