Alex Zimmerman’s 35-plus years of promoting energy efficiency, green buildings and sustainability has earned him the Lifetime Achievement Award from the organization he served as founding president: the Canada Green Building Council (CaGBC). 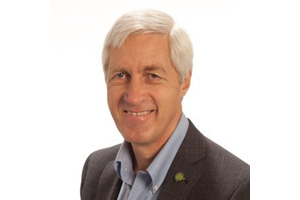 “It’s quite an honour,” said Zimmerman, who didn’t know he was being honoured until his name was announced at a June 3 ceremony at the Vancouver Convention Centre as part of the CaGBC’s national conference.

“I’ve tried to make a difference throughout my whole career, but I would say that founding the Canada Green Building Council is my single biggest accomplishment. Getting that up and running has had the biggest impact and it’s probably the thing that I’m most proud of.”

The graduate of Winnipeg’s University of Manitoba and Red River College served a couple of years in the Royal Canadian Navy in the mid-1970s before embarking on a career of leadership roles in a variety of companies and organizations, providing services to clients in the public and private sectors.

Zimmerman currently runs Applied Green Consulting in Victoria, focusing on operational sustainability in the building industry at the project and organizational levels.

The company has extensive experience in many aspects of technical development and the implementation of energy reduction, environmental management and sustainability strategies and tactics in the buildings sector.

Applied Green is presently working with three Victoria high schools, which are much more than basic classrooms and a gym as during Zimmerman’s youth, and code requirements and mechanical systems are also more complex today.

“They are interesting challenges from design and LEED perspectives,” said Zimmerman, who was instrumental in signing a licensing agreement with the United States Green Building Council for Leadership in Energy and Environmental Design (LEED) in 2002 and adapting the rating system for Canada.

“There was a lot of interest in LEED in Canada, but it didn’t precisely suit the Canadian situation,” said Zimmerman, who added the CaGBC’s pioneering work helped lead to LEED being recognized as the international mark of excellence for green building in 150 countries.

Uncertainty in early days of CaGBC

While that’s been a great success, Zimmerman said the CaGBC wasn’t guaranteed to be one since there was East-West division on how to move forward and he was chosen as its initial president since he was seen as a neutral party who had the confidence of both camps.

“When they asked me to be president, I saw it as an opportunity to bring the country together and move forward. But it took a while to scrape together enough seed money to get it going and, by the time I came aboard in 2003, we only had $50,000 and I was employee number one.”

Zimmerman put in place the complete organizational infrastructure at start-up, developed strategic plans and implemented key organizational strategies. He led the council through the transition from an appointed to an elected board and solidified key partnerships with the federal government.

During Zimmerman’s tenure, CaGBC membership grew by an average of 10 per cent per month to more than 900 member organizations. He also delivered net positive financial income in the first and second years of the organization’s existence while spending much time on the road advocating for green buildings and the CaGBC.

But Zimmerman claimed the CaGBC wouldn’t have become what it is today without the passion and commitment to the cause shown by members of a volunteer board in the two years he was president before he was succeeded by Thomas Mueller, who’s still at the helm 10 years later.

Zimmerman continued to serve the CaGBC as a member of its board of directors from 2005 to 2012 and through chairing its LEED steering committee.

“Early on in the green building business, we were saying that it was a good environmental thing to do and didn’t make the connection to the business bottom line,” said Zimmerman.

“Now we’re seeing the business and real estate communities coming back and saying, ‘We get it. It’s a business driver for us and it’s good for the environment.’”

Zimmerman has provided services to clients in Canada, the United States, Mexico, India and last year in Italy, where he was impressed by some contracting practices and the communication between designers and contractors, but said there were also things he brought to the project the Italians weren’t aware of.

“There are some things we do better and some things that other countries do better,” said Zimmerman, who added Europeans are interested in LEED because they see it as a simpler means of certification than what else is available to them, while many in North America criticize it for having too much paperwork.