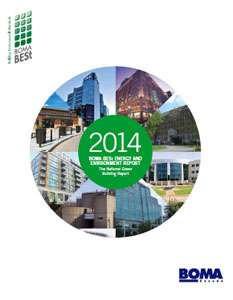 This initiative came a mere year after the launch of the Building Owners and Managers Canada’s Building Environmental Standard (BOMA BESt) for energy and environmental performance in existing buildings, making Bell Canada an early adopter of the program.

There are now 41 Bell-occupied buildings across Canada – totaling about eight million square feet of office space – that have obtained a BOMA BESt certificate. Eight of those buildings have achieved the prestigious BOMA BESt Level 3 and 4 while another earned a BOMA Earth Award.

Bell Canada’s environmental achievements for its building portfolio are profiled in the fifth annual BOMA BESt Energy and Environment Report (BBEER) released June 26 by BOMA Canada. It marks one of about 15 case studies in the report that emphasize company testimonials in addition to case studies on individual buildings, marking a change from previous years’ reports.

“We wanted to put more focus on recognizing companies that are using BOMA BESt as a program to advance their sustainability objectives, and the benefits they are seeing from their efforts, in addition to case studies on individual building performance,” said John Smiciklas, director of energy and environment for BOMA Canada.

“Bell Canada recognizes that you can’t certify all buildings in the program at once . . .  it’s going to take a while. However, this won`t stop them from being able to benefit from this investment right away thanks to improved performance.”

What takes time, according to Bell Canada, is communicating environmental initiatives to employees and tenants. The company has used the guidance provided in the BOMA BESt program to engage employees and raise their awareness and the role they play in reducing Bell’s environmental footprint.

By the end of 2014, Bell Canada is seeking to certify an additional 26 buildings for a total of 67, which would account for 80 per cent of the office space occupied by its workforce.

The momentum Bell Canada has established with the BOMA BESt program will also allow the company to pursue other ambitious goals such as to recycle or compost 70% of the waste generated by its office buildings by the end of 2015. At its Montreal Campus headquarters, it currently recycles 61% of its waste – a three per cent improvement over 2012 results.

Key findings in the report

Energy consumption continues to be a cornerstone of the BOMA BESt program, although other environmental measures have been included since the beginning. In particular, waste is rising on the sustainability agenda, according to Smiciklas.

“As outlined in the report, from 2009 to 2012, Alberta Infrastructure’s BOMA BESt certified government buildings reduced their energy consumption by 5.8 percent; more than double the reduction observed in their portfolio average of 2.3 percent. We believe this demonstrates that buildings that go through the process of certifying to BOMA BESt have better energy performance than the buildings that are not in the program,” Smiciklas said.

The implementation of building management best practices is central to the BOMA BESt program. “One of our key recommendations continues to be that buildings put in place comprehensive energy reduction programs in conjunction with energy efficiency upgrades. To get maximum value, both have to be there,” Smiciklas said.

“We are trying to assist the commercial real estate industry in identifying best management practices for all building operations. A building does not need to be new to achieve high performance levels, but it does need to be managed well.

“How you manage a building can really make a difference.”

This year’s analysis suggests the BOMA BESt Program has contributed to an overall improvement in energy and environmental performance of buildings. Of the buildings recertified, 65% saw an increase in their overall score.

Not all buildings that go through the assessment process choose to certify their buildings. Parks Canada and Transport Canada, for example are using the BOMA BESt program to assess and improve properties across Canada as part of their sustainability initiatives. Buildings in some of our most iconic national parks, including Banff, Jasper, Gros Morne, La Mauricie and the Rideau Canal, are undergoing this process.

In 2013, there were 711 buildings certified or recertified by the BOMA BESt program and are the focus of the analysis in the organization’s annual report. That is the highest number since the program was first offered in 2005, Smiciklas says.

BOMA BESt validates energy and environmental data when a building is certified or recertified, which is required every three years, but does not validate information provided to the program in the interim years. Until a building achieves a minimum of BOMA BESt Level 2 certification, consumption data is not verified and as such is not included in the annual report.

The 2014 report (analyzing data from the 2013 calendar year) provided aggregated data for 400 buildings certified BOMA BESt Level 2 to 4, a subset of the 711 certified in 2013 that achieved Level 1 to 4 and representing about 100 million square feet in all.

The report notes that while the office sector continues to dominate, the number of BOMA BESt certified buildings, comprising 77% of those in Levels 2 to 4, there has been a significant increase in light industrial buildings and ones with British Columbia addresses.

In 2012, BOMA BESt introduced a new module for multi-unit residential buildings (MURBs) a category that applies to both apartment buildings and residential condominiums. There were 30 buildings certified under the MURB module in 2013.

New in 2014 is the BOMA BESt Health Care module

This year, BOMA Canada will be releasing a new module, the Health Care module, to target hospitals, medical offices and long-term care facilities. BOMA Canada completed the pilot stage in July and will launch the new module in August.

The 2014 BOMA BESt Energy and Environment Report was prepared with the technical assistance of engineering firm Halsall Associates.