Building Owners and Managers Association (BOMA) BESt certifications were awarded to 562 Canadian buildings in 2014, pushing the total number of properties to be certified or recertified to 4,124 since the program’s 2005 inception. 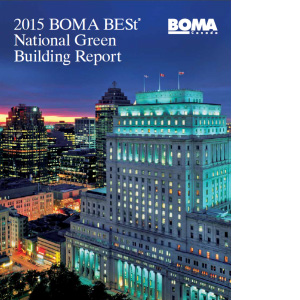 “From the conversations we’ve had with members, we can sense that there’s a sense of excitement among them with the program and what it’s doing,” BOMA Canada environmental standards manager Hazel Sutton said of a process that provides common standards, an array of online assessment tools and four levels of energy and environmental performance certifications.

Majority of certifications in Ontario and Quebec

The just-released 2015 BOMA BESt National Green Building Report indicates more certifications were recorded in 2014 than in any other year except 2013. More than half took place in Ontario and Quebec, driven by plenty of activity in Toronto and Quebec and the federal government’s mandate to occupy more environmentally friendly buildings in Ottawa.

“We’ll work with other locals to engage them more so that they can raise interest and awareness among companies and buildings that may not be involved with BOMA BESt,” Sutton said of attempting to achieve more balanced certification numbers across Canada.

The level of certification pursued increased in five out of the six asset classes and the percentage of buildings achieving a Level 2 to 4 certification (on a scale where 1 is the lowest and 4 is the highest) increased to 70 per cent from 58 per cent in 2013.

Level 3 and 4 buildings tended to maintain their level when recertifying while a number of Level 2 buildings (representing 12 per cent of the overall total) dropped down to Level 1 on recertification.

“Once you start with BOMA BESt, it’s hard to turn back,” said Sutton, who pointed out that, as soon as property owners and managers learn more about how their buildings perform, they generally strive to improve.

Energy consumption for office buildings was slightly higher in 2014 than in 2013, but the overall trend shows a decline of more than 15 per cent in energy use intensity since 2008.

“It will be interesting to see how they do next year when some of the data will reflect that much of Canada had a harsher than normal winter,” said Sutton.

“The scores per category are pretty stable and we’re not at all concerned,” Sutton said of the miniscule drop. “We generally expect things to maintain and make small improvements, but nothing drastic.”

The average scores for each category were: energy 68.1 per cent; water 66.9 per cent; waste and site 76.2 per cent; emissions and effluents 88.6 per cent; indoor environment 84.4 per cent; and energy management system 96.5 per cent.

Open-air retail was best at reducing emissions and effluents with a score of 91.1 per cent. There were five enclosed shopping centres certified in 2014 and they had the highest average indoor environment score of 88.8 per cent. Light industrial buildings were lowest at 77.6 per cent.