This week’s announcement that shopping centre Sherway Gardens had installed the largest green roof on a free-standing commercial structure in the GTA (at about 120,000 square feet) put the spotlight on green roofs – at least temporarily. 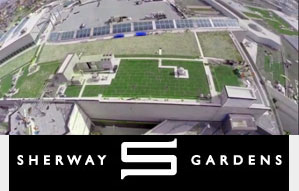 Given Toronto’s current building boom, it’s heartening to learn installations such as Sherway’s are not one-offs, but part of a bigger green trend.

Toronto is, in fact, the fourth-largest market for green roofs in North America, thanks to the city’s Green Roof Bylaw as well as the Eco Roof Incentive Program, which offers grants to install a green roof. Combined, those incentives and the maturation of the green roof industry generally has put Toronto behind only Washington, D.C., Chicago and New York for green roof bragging rights.

Mega projects like the Sherway installation, part of that shopping centre’s larger expansion program, will go a long way to raising the awareness of the green roof trend. (Sherway’s vegetated roof is being featured in a television series, Made to Renovate, on iChannel in 2015).

Unlike most green roof installations that are far above the sightlines of GTA residents, the Sherway greenery will also be visible to commuters, noted Sasha Aguilera, client services and design consultant with green roof provider Xeroflor Canada Inc., who took time out from a green roof conference in the U.S. for a phone interview.

“A lot of green roofs are really out of sight and out of mind and many of us Torontonians have no idea how littered our city is with green roofs,” she said.

Xeroflor touts itself as the “recognized international leader of green roof technology” with more than 40 years’ worth of experience in the field, although it is facing more competition in Canada and in other markets.

The company got its start in North America when Ford Motor Co. approached it with a request to install a green roof on its 10.4-acre Rouge assembly plant in Michigan. That groundbreaking installation not only proved green roofs could go on any rooftop – even lightweight factory roofs – it also got Xeroflor interested in the North American market and prompted it to set up licensing deals with domestically owned and operated partners like the deal that Xeroflor Canada operates under.

In just a few years of operation, the Canadian unit of Xerofloor has installed more than 100 green roofs. This year it is on pace to install approximately 50 across Canada, with the majority topping new condo developments in Toronto, Aguilera said.

Besides Sherway Gardens, notable large installations for Xeroflor in Canada includes green roofs as part of a new Coquitlam water treatment plant and a green roof alongside solar installations at a GTA IKEA store.

There are a number of benefits to green roofs – a more natural space for residents or employees to congregate, lower heating and cooling costs, life extension of the roof membrane, and even the lessening of the city “heat island” effect in the summer – but that is not the main impetus for municipalities such as Toronto to support green roof construction.

Instead, it is the support green roofs provides to overloaded drainage and sewer systems that has led Toronto, for one, to back the greening of its rooftops.

“It was the stormwater management, and that is going to be the biggest motivator in some of the oldest cities in North America,” said Xeroflor’s Aguilera. “They were never prepared for the growth they have experienced so their infrastructure simply cannot manage. In Toronto, it is skyscraper after skyscraper and the infrastructure can barely” keep up.

The big benefit of green roofs – at least from the perspective of municipal engineers – is the soil and vegetation slows the release of water into a city’s sewer system.

In the case of the Sherway Gardens installation, the Xeroflor green roof can retain 1.5 inches of rainfall in a fully saturated state. The system, billed as “one of the lightest green roof systems available,” weighs 12 pounds per square foot fully saturated. It also featured optional stone mulch, adding to this weight and helping to further protect the plants and promote their growth.

Sherway Gardens’ general manager Andy Traynor touted the infrastructure benefits of the new system in an announcement this week. “Our new 102,000-square-foot green roof will help slow stormwater runoff from the roof, benefiting both the city and the environment. The green roof also played a role in ensuring that our expansion was LEED certified.”

Despite the many benefits green roofs provide to building owners and their tenants, suppliers such as Xeroflor find that education is a major part of any sales process.

“There is still a lot of room for educating commercial owners on the benefits of green roofs,” said Aguilera. Building owners and operators are initially concerned about the weight of green roof systems (plus the water they absorb), which she said is quickly dispelled by showing the projects the company has up and running.

“The perfect example is the Ford plant,” she said. “That was why Xeroflor was approached and the architect called Xeroflor the holy grail of green roofs for that.”

Beyond the lack of general knowledge about what green roofs can and can’t do, she said, is the issue of cost. “There is no downside to green roof other than the cost.” The typical cost for lightweight, low-maintenance systems, which are billed as “extensive systems” cost from $15 per square foot to the mid-$20s.

Payback for a green roof system “is the No. 1 question” Xeroflor gets from perspective customers. That depends on the height of the building – the lower the better – and whether there are grant programs available such as in Toronto.

The good news, Xeroflor’s Aguilera said, is that other Canadian municipalities such as Ottawa and Montreal are looking at the success of Toronto’s green roof push.

“Other municipalities seem to be interested in following in the same footsteps, and I think that will ultimately drive the green roof industry, it is policy.”