The COP21 climate change conference in Paris closed on Dec. 12 with an agreement by almost 200 countries to keep global temperature increases “well below” two degrees Celsius by the end of the century. 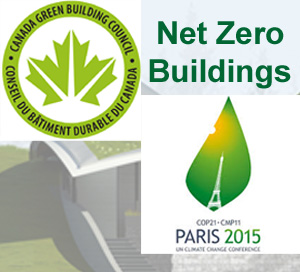 If the agreement, which takes effect in 2020, is to bear fruit, more energy-efficient and environmentally friendly buildings will need to play a significant role.

“We need to attack the problem from all directions, and organizations from different fields need to take leadership in those areas,” said Canada Green Building Council (CaGBC) president and chief executive officer Thomas Mueller.

“We’re going to do that with buildings and building materials.”

The CaGBC was represented by the World Green Building Council at the Dec. 3 Buildings Day that included participation from about 100 global business leaders and approximately two dozen national green building councils.

“There are quite a few countries that are committed to introducing a net zero type of certification and verification in the near future,” said Mueller. “That speaks to the urgency of where new building construction needs to go.”

The CaGBC will seek input from Canadian building industry and government representatives over the next year to come up with national definitions of net zero, carbon-neutral and carbon-positive. These stakeholders will also develop a path on how to make more buildings net zero and a timeline for how long it will take to get there.

“Net zero is primarily focused on energy, but carbon-neutral and carbon-positive talk about carbon,” said Mueller, who added: “Giving a building a net zero designation doesn’t mean that it’s going to be net zero from there on in. It depends on how the building is used as well.”

The CaGBC supports the various levels of government across the country that are developing energy benchmarking policies for buildings, and Mueller would also like to incorporate water and waste benchmarking.

The CaGBC will release a white paper in 2016 that it hopes will provide a framework on how energy benchmarking should occur in Canada so policymakers and the building sector can use it to formulate a program.

“We need to understand how our buildings perform and what their energy use is from region to region and building type to building type, and how that increases or decreases over time,” said Mueller.

“We don’t have that data in Canada. We have some of it now with Energy Star being run by NRCan (Natural Resources Canada), but we don’t have enough of it.

“Companies that have buildings across all regions of Canada don’t want to be using different benchmarking methodologies in Vancouver, Winnipeg and Halifax.”

While the CaGBC will attempt to develop a net zero rating verification system, Mueller would prefer it align with the U.S. Green Building Council to avoid having two significantly different definitions and to create a system that would encompass North America.

The CaGBC has committed to launching major actions to increase investment in green buildings across Canada, and it will release research next month that highlights the economic impact they’ve had thus far. It aims to spur more research and development in Canada’s building industry, which Mueller believes hasn’t been a priority.

The CaGBC has also pledged to work with federal, provincial and municipal leaders to support the development and implementation of green building and sustainability policies across Canada.

This includes ensuring government buildings and publicly funded buildings such as schools and hospitals have strong policies.

By greening the building stock across the country, Mueller claims the CaGBC has contributed to reducing an estimated 822,731 carbon dioxide equivalent tonnes of greenhouse gas emissions, comparable to taking more than 155,000 cars off the road for a year.

Canada has the second-highest number of Leadership in Energy and Environmental Design (LEED)-certified buildings in the world and the highest number per capita. The two-year-old LEED Version 4 incorporates environmental product declarations where project managers are asked to provide information about materials that go into their buildings. It also requires ongoing measurement and reporting of energy and water use once a building has been certified.

“When it comes to carbon targets, you can’t rely on one technology or one strategy,” said Mueller. “You need to throw everything you have at that problem because otherwise you’re not making progress.”

By mid-2016, the CaGBC should have a new strategic plan for what it should be doing over the next three to five years.

“It’s always good to look at what you’re doing and see where you can add more value,” concluded Mueller.