Inside the new Papadakis Integrated Sciences Building on Philadelphia’s Drexel University campus towers a 1,460-square-foot living wall biofilter. The 1,500-plant wall is integrated into the building’s air handling system to achieve improved air quality and a reduction in energy consumption.

The living wall also acts as a centrepiece for the university’s new home for the Biosciences Department and what is being hailed as a landmark building on the campus. The building’s open, five-storey atrium features a four-storey elliptical stairway that overlooks the vertical, floor to ceiling green wall. 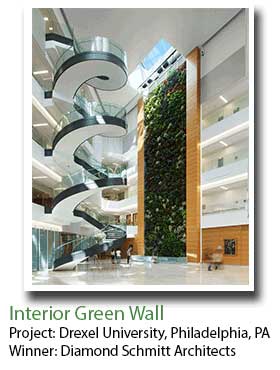 This spectacular new, environmental addition to the Drexel campus is one of two Canadian-designed green walls and roofs to take home honours from the 2013 Green Roof and Wall Awards of Excellence.

Awards at the Green Roof and Wall Conference

The awards ceremony will take place in San Francisco on Oct. 25 at the 11th annual CitiesAlive, Green Roof and Wall Conference. The awards recognize outstanding projects in seven different design categories, as well as accomplishments in research, policy development and corporate support.

“The living wall biofilter provides a focal point for encounters and is symbolic of the sustainable design principles that are at work within the Papadakis Integrated Sciences Building,” said Donald Schmitt, of Diamond Schmitt Architects.

Along with NEDLAW Living Walls, Diamond Schmitt Architects led the Papadakis project. Diamond Schmitt is a Toronto-based architecture firm founded in 1975. Among its projects are the new 500,000-square-foot, 17-storey tower on King and Front Streets in Toronto that will become the new home of The Globe and Mail.

While Diamond Schmitt is being honoured for the wall, the firm designed the Papadakis Integrated Science Building as a whole. The building contains 32 research labs, eight teaching labs, and specialized computer and paleontology labs, among other amenities. 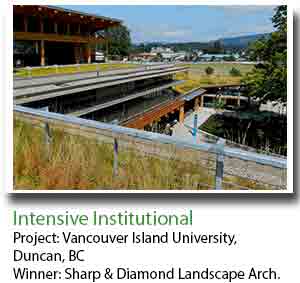 Clad in Indiana limestone, the LEED Gold-certified building’s living wall can potentially provide 75 to 85 per cent of the building’s fresh air intake requirement. The wall is a closed loop hydroponic system.

The base of the living wall catches the water, which drains to a reservoir located on the floor below. Inline pumps lift the water from the reservoir to the top of the wall, where a diffuser spreads the water evenly across the top. The water then trickles back down the plants to the catchment.

The other award winner is Vancouver-based Sharp & Diamond Landscape Architecture for its 50,000-sq.-ft. green roof for Duncan, B.C.’s Cowichan Campus of the Vancouver Island University.

The project is built to LEED Gold standard certification. On average, the roofs retain 90 per cent of the annual rainwater in eight cisterns, which are partially buried in the ground next to the building.

Students and staff have also created a small rooftop garden area, where they are growing salad greens, herbs and climbing beans. The garden is also used as part of an employability skills course, taken by 12 students with disabilities.