CivicAction’s Race to Reduce ends on a high note

CivicAction’s Race to Reduce smart energy office challenge significantly exceeded its four-year target of 10 per cent as it drew to a close last week. 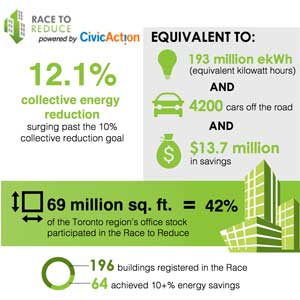 A total of 196 Greater Toronto Area office buildings — representing more than 69 million square feet or 42 per cent of the office space in the region — dropped close to 193 million equivalent kilowatt hours or 12.1 per cent in collective energy use over the four years.

“This is the equivalent of taking 4,200 cars off the road and putting $13.7 million back into office landlords’ and tenants’ pockets,” said CivicAction chief executive officer Sevaun Palvetzian.

“It used to be that landlords would look at it from their bottom line and tenants might look at it from their perspective, but it takes both sides of the coin to really see the true culture change that we’re talking about. We hope that the companies and buildings that have made an effort continue those efforts and maybe take them to new levels.

“There are also a lot of buildings that haven’t been part of the race that can also use this framework.”

With winning buildings located in Burlington, Oakville, Mississauga, Vaughan, Markham and Toronto, the final Race to Reduce awards ceremony on Nov. 5 saw representation from office building owners, tenants and workers from across the region and showed how little energy is needed to run a building while meeting tenants’ and their employees’ needs.

In addition to the energy use reductions and collaborative efforts between landlords and tenants generated by the Race to Reduce, Palvetzian said there was another major achievement.

“We’re moving into a new era of transparency where these kinds of results are collected and reported on publicly. This race entered that era before the policy world did, so the market transformation in reporting this information was pretty cool.”

CivicAction — which builds partnerships and takes action through campaigns, programs and organizations to attempt to transform the Greater Toronto and Hamilton areas — surveyed Race to Reduce participants less than a year ago to see how they were doing as the program was beginning to wind down.

Palvetzian said she was thrilled that 62 per cent of respondents said they wouldn’t have done as much with their buildings and tenants to try to cut back on energy use if they hadn’t participated in the Race to Reduce.

Race to Reduce may become national

While CivicAction’s involvement with Race to Reduce has ended, BOMA Toronto has committed to building on the momentum of the program and developing its next iteration, while Manitoba Hydro will support a version in Winnipeg.

“BOMA is a great example of an organization that’s been working with us for some time on the race,” said Palvetzian. “They’ve been in at the ground level and will be able to take the baton and run with it. We would love to see BOMA take it national.”

The average Portfolio Manager EnergyStar score across the 17 lowest energy use award winners was 95.5 out of 100, an impressive 37 points above the Canadian national average for commercial office buildings.

A complete list of award winners can be viewed here.