CRE has crucial role in cap-and-trade

The commercial real estate industry will have an important role to play when Ontario joins Quebec and California in imposing a greenhouse gas cap-and-trade system in 2017, attendees of a BOMA Toronto-sponsored discussion heard Tuesday. 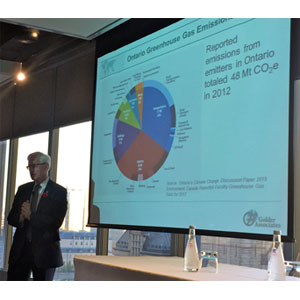 “Even though buildings might not be directly affected by cap-and-trade, we need to keep our eye on the ball and the performance of our buildings and make sure we’re part of the larger solution,” BOMA Toronto director of sustainability and building technologies Bala Gnanam said at Toronto’s Arcadian Court.

The Ontario Ministry of the Environment and Climate Change has started consultations on the draft regulation and Sean Capstick, principal at the Golder Associates consulting, design, and construction services firm, said: “There are opportunities for members of the building sector to come together and say these are the types of incentives, above current incentives for energy reduction that are out there right now, that are going to change the way buildings are designed and operated and managed.”

Buildings accounted for 17 per cent (29 megatonnes) of Ontario’s greenhouse gas emissions in 2012. Transportation accounted for 34 per cent, industry for 30 per cent, electricity for nine per cent, agriculture for six per cent and waste for four per cent.

“The idea for cap-and-trade is to pick on the largest emitting sectors and facilities,” said John Godfrey, special advisor for climate change and chair of the Ontario government’s Climate Action Group.

Some industries, including iron and steel and cement manufacturing, are very energy-intensive and emit large amounts of greenhouse gas. They’re also trade-exposed and subject to competition, which is why they’ve been given a transitional period to help them adjust in other jurisdictions that have already adopted cap-and-trade systems.

“How do you put a price on these guys without driving them out of business?” asked Godfrey. “That’s the challenge.”

All but the biggest buildings won’t be directly regulated by the cap-and-trade system, though energy suppliers — which have a monopoly and will be hit with full carbon pricing — will be. This will increase the cost of natural gas and electricity for building users and owners.

Transportation and heating fuel will be the largest sources of revenue, with Ontario collecting approximately $2 billion in regulatory fees per year that will be reinvested into reducing greenhouse gas emissions. Building retrofits and other means of achieving greater efficiency will qualify to receive some of this money.

Rosemary Martin, vice-president and chief sustainability officer at First Capital Realty Management Services LP (FCR-T), favours a carbon tax using the existing infrastructure of the tax system because it’s simple and straightforward to administer and communicate, and applies to industries, businesses and consumers.

“I think it’s going to be very difficult for the government to explain cap-and-trade to the average person in a 10-second sound bite.”

She also said mass transit for everyone should be the government’s first priority and that the building code should be revised to include energy performance.

“The anticipated results would be: a better educated, more environmentally aware public; a more resilient built environment; more socially connected and happier and healthier citizens as a result of mass transit interconnectedness and not being isolated in our cars from other people and society; and obviously a stronger and more productive economy.”

Randal Froebelius, former BOMA Canada chair and president and founder of Equity ICI Real Estate Services, stressed education is important for tenants of his company’s properties, many of which are small street-front retail operations and owner-operated office buildings.

“A big part of what we do is to try to make them understand what their energy consumption is and really encourage them to dive in and understand that,” said Froebelius.

“Where we can really help is plowing that money trading back from the carbon into programs that are going to be used by these guys to do retrofits or split up metering.”

In closing the presentation, Gnanam succinctly summed up commercial real estate’s role in the upcoming cap-and-trade system: “Climate change is everyone’s business and we all have a part to play.”