Dining in 'sustainable' style at the Yorkdale food court

Sitting in a stylish lime green chair on the third floor of Toronto’s Yorkdale Shopping Centre, it is easy to forget you are in a food court. Dine on 3, the third-floor space that was transformed and reopened in June 2012, is modern and inviting. It features skylights, an outdoor patio and indoor fireplace, seating for 900 and 19 restaurants, from A&W to Villa Madina. But the food court, which is redefining the shopping centre dining experience, is as much about sustainability as it is about style. 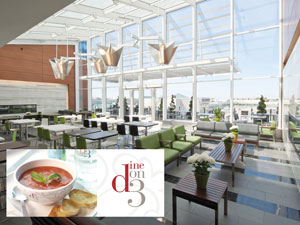 The space was designed to align with Yorkdale’s sustainability directives. It was one of Canada’s first shopping centres to implement a recycling program and, since 1994, has continually raised its targets for reducing waste.

Yorkdale’s owner, Oxford Properties Group, is equally passionate about green building and corporate social responsibility. The organization was recognized as an industry leader in sustainability with a first-place ranking in the North American Regional Diversified-Office and Retail category in the 2014 Global Real Estate Sustainability Benchmark survey.

Andrew McAllan, senior vice-president and managing director of real estate management at Oxford Properties and the current chairman of the Canada Green Building Council, says the company first embraced sustainability about a decade ago.

“We embarked on a program of using LEED (Leadership in Energy and Environmental Design) certification to help focus our teams on matters of sustainability, believing that our customers, the occupants and visitors, would value it,” he adds. “We did it in a couple of places and got a very positive reaction, so we are now building all our new buildings to a LEED Platinum standard.”

“We always have to have sound business practice underlying everything we do, because ultimately we have to pay pensions,” explains McAllan. “While we do have a robust corporate social responsibility and sustainability practice, it has to be good business.”

Doing away with waste

The Yorkdale Shopping Centre project offered Oxford Properties the opportunity to reinforce those objectives. Food courts, a convenient and quick stop for their customers, are typically producers of vast amounts of Styrofoam, plastic and food waste.

Dine on 3 produces no garbage. Its reusable tableware is made of melamine and if it breaks it is completely recyclable. The food court goes through 2,700 plates, bowls, glasses, cutlery and trays a day.

In the state-of-the-art scullery, the dishwasher saves 85 per cent of the water it uses. The recycled grey water guides food waste to a pulping machine, which grinds it up so that less weight will be composted. It has a mixed compacter for recycling, which accounts for 80 metric tones a month, while organic waste amounts to 150 metric tones.

“The amount of garbage that is removed from the landfills as a result of making this conversion is significant,” adds McAllan. “The food is now composted and put to good use, as opposed to being mixed with Styrofoam and plastic and sent off to the landfill.

“It’s gone from a daily pick-up of contaminated garbage, to one weekly pick-up that goes straight to a composting facility and ends up on flowerbeds.”

One might imagine a project of such magnitude would carry a significant amount of up-front costs, but McAllan says these were relatively nominal. “One of the messages I always try to convey to my colleagues in the industry is that environmentalism and good business can come together,” he adds.

“Too many people think that, if they’re going to be environmentally friendly, it is going to have to cost extra. My contention is that, while there are some start-up costs associated with buying the dishes, for instance, we do not have to buy thousands of Styrofoam containers every month. We are more than offsetting the minor increase in operating costs.”

Yorkdale’s food court has seen its volume of sales rise to nearly 50%. Foot traffic has also increased, by between 20% and 30%, a clear example of how the sustainable food court is enhancing the customer experience.

“Instead of eating out of Styrofoam boxes, you’re eating off a real plate, and people feel good about that experience,” says McAllan. “That’s the blue water that we look for – the opportunity to marry corporate social responsibility and good business to create a better customer experience and, ultimately, a better return for the pensions.”

Yorkdale’s Dine on 3 project was one of the first of its kind in Canada, but it has started to become a much more common practice in the past two years. In August 2013, Oxford Properties also converted the food court at Square One in Mississauga.

“We have invested and re-invested in our food courts in our shopping centres and office buildings for years, because they are so important,” says McAllan. “We wanted to have the experience of doing the conversions at Yorkdale and Square One, two of our busiest food courts, and really perfect it. This is something we have seen migrating to our other food courts.

“The consumer is telling us they want this experience and it also meets our environmental objectives.”