Lindsay, the president of Dartmouth, N.S.’s East Port Properties, believes it’s important to be green, but also that it needs to be done properly. 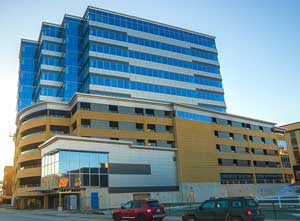 Case in point: a couple of months ago, East Port received LEED certification for its multiple occupancy industrial building at 122 Dorey Avenue in Dartmouth. According to Lindsay, East Port sought only straight certification. “We could have spent money and bought a couple of points,” Lindsay says, but he didn’t believe the extra expenditure to achieve Silver status was good value.

Priorities different, but no less rigorous

That doesn’t mean Lindsay and East Port stint on standards, only that their priorities are different, but no less rigorous. In fact, East Port recently took home two Leadership in Environmental Advancement Program awards from the Healthcare of Ontario Pension Plan (HOOPP).

The awards are given for excellence in energy performance and environmental sustainability. East Port won in the categories of low energy leader and sustainability innovator. The latter award was given for work on its 122 Dorey Avenue warehouse, the same building that passed on the LEED Silver status.

Lindsay says he doesn’t adhere to strict environmental standards because he believes it’s going to make the company loved or better able to market its properties. Rather, he just tries to do things right.

“You’re in the knowledge business. Brains are the most important thing and they’re fuelled with oxygen, so you should make sure that you’re delivering the correct amount of oxygen for the people in the buildings.

If Lindsay’s stance is a little unusual and certainly progressive, well that’s just the way the company rolls. Even since it began in 1981, East Port has done things differently.

Lindsay’s father founded East Port in 1981 to pursue commercial real estate projects in Dartmouth. At that time, East Port was a side project while Wharf Development, the family’s construction company, was the going concern. In 1985, it built Halifax’s landmark office building Purdy’s Wharf, a two-tower development that serves as a commercial anchor for the city’s waterfront.

When completed, Purdy’s Wharf was the first commercial building in North America to use sea water circulated through the structure’s heat exchange system as a cooling system.   Subsequently a similar system was built that uses water from Lake Ontario to cool buildings in downtown Toronto that is now owned by Enwave.

When the company ended its time as manager of Purdy’s Wharf in 2000, they decided they could no longer keep the name and so took on the East Port name at that point.

East Port concentrates on real estate solely in Halifax and St. John’s, N.L. These days all their deals are done on behalf of HOOPP and Greystone Managed Investments. Lindsay says in both instances the relationships came out of their development and management of Purdy’s Wharf, which at the time was one of the largest pension fund investment projects in Canada.

In total, the company is responsible for more than four million square feet of office and industrial space between the two cities.

Currently, East Port is finishing up 351 Water Street in St. John’s. The building is 12 storeys, six of which are comprised of a parkade with a lobby and retail area. There is a six-storey tower above that with 168,000 sq. ft. of office space. The building is fully leased.

East Port is also slated to begin work on the expansion and renovation of Scotia Centre, also in the Newfoundland & Labrador capital. Greystone bought the 11-storey building in 2009. The expansion will see it go from 190,000 to 217,100 sq. ft.

As well, the company is completing the final two buildings at  The Beclin Business Park, its six-building industrial campus in Mount Pearl, N.L.

Closer to home, East Port has rebranded a set of buildings constructed at different times in the Burnside Industrial Park. Lindsay says the aim is to give the Blue Frog Business Campus buildings a unified identity in order to stand out.

Overall, Lindsay says East Port is content to operate in Atlantic Canada. He points out East Port isn’t a large company and being Anglo leaves Quebec out of the picture. Toronto and points west are well served by any number of large development groups, Lindsay says.

“So we have realized our job is to be the best adviser in Atlantic Canada in workplace real estate and just do it well,” Lindsay says. “We have access to more capital than the market can deploy. It’s just a question of making sure we only do things that are best for our client pensioners.”