The City of Edmonton has a long history of  holding lotteries to sell house lots, a process that has been met with wild enthusiasm by its citizenry. 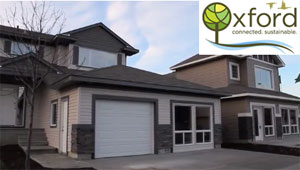 On May 8, the city lottery drew 200 prospective buyers for 40 lots in a new municipally owned subdivision. The first phase of the same project drew a crowd of 300 while an earlier sale in Hollick Kenyon drew about 1,500 names.  In 2006, nearly 100 lined up overnight for a chance at Edmonton’s Century condo.

Today, Edmonton is taking advantage of the success of its lottery system to encourage sustainable design and construction for residential properties resulting in new homes built well above mandated bylaws and building codes.

The most recent land lottery involved properties in the Oxford Development Phase 2. Located in the northwest portion of the city, the development lies within the boundaries of the city’s ring road – Anthony Henday Drive – and is part of limited development land left in the prime geographic area.

Add to that the scarcity of lots available to the public and the popularity of the program is evident. “The city is one of only a few developers who will sell lots to the public. We have a history going back 25 or 30 years of land lotteries as the most fair way of making them available,” said Bill Covey, director of Corporate Properties at the City of Edmonton.

There is also a city directive to sell inventory on the low end of the market, and to sell 50 per cent of lots to individuals rather than developers.

Covey says the city has long said it wanted to become more sustainable and these efforts proactively support that goal. “We made a conscious decision with Oxford Phase One that we wanted a minimum EnerGuide rating of 78 for the 40 lots sold in 2012. With Phase Two, our Urban Planning and Environment Branch encouraged a higher rating.”

Typically, homes built to code meet energy ratings of between 65 and 72. Homes in Phase Two are required to meet a minimum EnerGuide rating of 80 or Built Green  Gold. A construction waste component has also been incorporated into the conditions.

As an added incentive, grants of between $3,000 and $7,000 are available for homes achieving EnerGuide 82 or higher.

Homes in Phase Two are also required to be solar panel-ready. Covey calls this move a “no-brainer” for the costs of preparing a home now compared with future costs of adding solar without the required structural aspects built-in.

Covey says the public lots were advertised through multiple media sources, as well as to a “subscription list of thousands who want notice if the city sells any land, commercial or residential.” Word of mouth also played a role as this is the second phase of development in the area, with available lots ranging in price from $167,250 to $203,000.

“It was wonderful to see the excitement as people’s names were drawn and they had the opportunity to come forward and select their lot,” he said.

Available lots included a mix of single-family, appropriate for bungalows, two- and three-storey homes, a selection of duplex lots, and a number of lots intended for secondary suites. Covey says for the latter, advanced planning by the city will ensure the lots are sufficiently large to serve the extra parking needs of a second home. Site servicing, including water and power, has also been installed to meet the needs of two residences.

“Through our Cornerstones programs (the city’s plan for affordable housing), grants are also available to home owners building secondary suites on the condition they rent those homes for five years to people of moderate income,” said Covey.

He says the intent of the secondary suites and the grant is to inject more quality rental homes – homes that are owned by homeowners and eligible for CMHC (Canada Mortgage and Housing Corporation)  financing and insurance – into the market.

In the case of Oxford, a request for proposal (RFP) had also been issued including a qualification builders be certified BuiltGreen and agree to the minimum EnerGuide energy efficiency ratings. “We had a number of builders who didn’t apply. From those who did, we selected the best,” Covey said.

Covey says as an added bonus to home buyers , the city will be holding a solar draw for two $10,000 PV solar systems (PV) at the end of October for one purchaser who purchased a lot at the public draw and one buyer who purchased through one of the show home builders.

Covey says Phase One homes are in various stages of completion at this point and winners of the lots in Phase Two are expected to take possession around October once approvals and permits are in place. At some point, he expects an energy study will be conducted so that a public report card outlining the project’s success can be detailed.

“It’s exciting to us to be leading the way with this program. We see the success already in the numbers of people willing to take part. In the end, we’ll see higher sustainability, not through mandated bylaws, but through encouragement and opportunity.”

Oxford Phase One has been awarded the City of Edmonton’s Charles Labatiuk Award for Environmental Excellence and Covey said Phase Two has just been confirmed as a finalist in the category of continuous environmental improvement.

Covey said future planned developments for McConachie, Schonsee, Laurel and Goodridge Corners for 2015 and 2016 will likely follow similar plans. As the homes are intended for the lower end of the market, however, he says incremental increases in energy requirements will likely remain conservative and will be evaluated for potential cost before they are put in place.