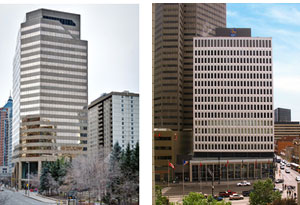 Artis now has 18 properties with a LEED designation, 24 with a Building Owners and Managers Association Building Environmental Standards (BOMA BESt) certification, and 23 with an Energy Star rating.

“Environmental responsibility is a core value, as well as a sound business proposition,” Artis president and chief executive officer Armin Martens says on the REIT’s website. “We are committed to conducting business in a responsible manner, minimizing our carbon footprint, waste generation, water and energy consumption. As with all key business metrics, Artis is committed to the path of continuous improvement in the field of sustainability.”

This 17-storey building in the heart of downtown Winnipeg at 220 Portage Ave. was certified LEED Platinum (building on the right in the image). It was built in 1966 and is connected to the Winnipeg Square underground retail concourse and indoor skywalks that link office towers and other downtown amenities. It has 170,103 square feet of leasable area and is 97.5-per cent occupied, with key tenants including the Royal Bank of Canada and Great West Life Assurance Company.

This 10-storey class-A building constructed in 2009 at 1331 Macleod Trail SE in Calgary’s business district, across the street from the Calgary Stampede and Convention Grounds and a light rail transit station, was certified LEED Gold. It has 162,502 square feet of leasable area and is completely occupied by several tenants on long-term leases, including IHS Energy Canada, ATB Financial and WSP Canada Inc.

This 23-storey class-A building built in 1981 at 800-5th Ave. SW in downtown Calgary was certified LEED Gold (building on the left in the image). It’s comprised of 255,337 square feet of leasable area and is 94.7-per cent occupied by tenants that include CGI Group, Bellatrix Exploration, First National Financial and Trimac Management Services.

This three-storey class-A building constructed in 2009 and 2010 in the Quarry Park commercial/residential area of Calgary was certified LEED Gold. It has 86,474 square feet of leasable area and is totally occupied by such tenants as Alberta Health Services, Orica, Lifemark and EFW Radiology.

This 30-storey class-A tower, built in 1979 at the iconic Winnipeg intersection of Portage Avenue and Main Street, was certified LEED Gold. It houses Artis’ head office and is connected to the Winnipeg Square underground retail concourse and indoor skywalk systems that link with downtown amenities. It has 545,460 square feet of leasable area, of which 56,964 comprise the retail component of Winnipeg Square. It received a BOMA Earth Award in 2012.

MTS Place is a 274,712-square-foot, two-building complex located in the heart of Winnipeg’s financial district at 333 Main St. and 191 Pioneer Ave. Both buildings were certified LEED Silver. The property is fully occupied, with MTS Allstream occupying 90 per cent of the space on a long-term lease. It received a BOMA Earth Award in 2012.

This four-storey class-A building, erected in 2007 at 6811 East Mayo Blvd. in Phoenix, Ariz., was certified LEED Gold. The 581,500-square-foot power centre provides numerous dining and entertainment options and is surrounded by executive housing communities and upscale shopping destinations. It has 152,629 square feet of leasable area and is 94.6-per cent occupied by a variety of national tenants, including Choice Hotels International Services Corp. and Axway, Inc.

Winnipeg-based Artis launched in 2004 and has a commercial portfolio encompassing approximately 25.6 million square feet of leasable office, retail and industrial space. It has properties in Alberta, Manitoba, Ontario, British Columbia, Saskatchewan and the United States.