Improvements in oil drilling technology are leading to a new energy boom in the United States, which in turn is boosting the fortunes of a number of North American cities. Commercial real estate investment company JLL has coined the phrase “surge cities,” to describe municipalities where real estate demand is beginning to surpass supply. 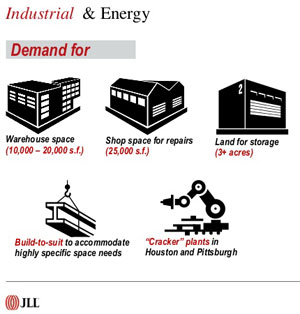 The cities include Calgary; Edmonton; Fort McMurray, Hobbs, N.M.; Midland, Texas; and Williston, N.D. “They are experiencing a tremendous demand for real estate facilities of all types wherever the energy boom is very much in evidence. There’s a shortage of all types, all sectors of real estate,” said Bruce Rutherford, an international director at JLL.

Rutherford’s comments come on the heels of the release of JLL’s North America Energy Outlook – 2014. In the report, the International Energy Agency predicts the U.S. will surpass Russia and Saudi Arabia as the world’s top energy producer by 2015. The so-called “shale boom” is concentrated in a number of major oil fields in the U.S.

Rutherford said Houston is the city most impacted by energy, with Calgary coming in at No. 2. “If you go north of Calgary to Edmonton and Fort McMurray and places like that, the energy boom there is even more obvious in that the energy companies and their suppliers are struggling to get the real estate they need to support their operations,” Rutherford said.

Edmonton is even tighter, sitting at a 2.4 per cent vacancy rate with an average asking rent of $12 per sq. ft. The JLL report notes land is “virtually non-existent” in southeast Edmonton and has pushed property prices to historical highs and forced companies to look to outlying areas such as Nisku and Leduc.

Combined, the latter two centres make up the second-largest energy park in North America, trailing only one in Houston. Eight facilities in the region are under construction, but JLL is predicting a gradual and stable increase in property values over 2014 and into 2015.

In the office market, some of Calgary’s energy companies are following the U.S. trend to vacate the downtown core for suburban space. Imperial Oil elected to move to an 800,000-sq.-ft. suburban campus, but the majority of firms are still renewing their commitment to the central business district. With 4.9 million sq. ft. of new office building coming onto the market, tenants may find themselves in a more favourable position starting in 2017.

In Edmonton, the picture is much the same: a current construction boom is expected to ease conditions for tenants, while a number of firms are moving to consolidate employees under one roof, both for cost savings and to increase collaboration.

Rutherford identified the three largest oil fields in terms of size and production as the Permian Basin in Texas, the Bakken Field in North Dakota, and the Eagleford Formation in south Texas.

“To give you some idea of the size, geologists believe that the Bakken Field may contain more oil than exists in Saudi Arabia,” Rutherford said.

While geologists always suspected those formations contained oil, they weren’t able to identify precisely where and didn’t have the technology to reach the oil until recently.

Innovations in hydraulic directional drilling, giving drill bits the ability to make turns, go horizontally and even do corkscrews, coupled with improved geology and seismic technology that enables geologists to more accurately map the formations, is enabling the production of new supplies of oil and gas.

Even as the U.S. ramps up production of the light, sweet oil from these formations, the country still has a large demand for heavy oil, of which Canada is its largest supplier. For now, the U.S. has limited capacity to refine and an inability to legally export light oil, although companies are aggressively lobbying for the right to do so.

With work in the energy sector on both sides of the border ramped up, the shale boom is impacting everything from workers’ salaries to real estate demand. Rutherford points out that an energy worker’s salary is 58 per cent higher than average. The extra money gives them stronger purchasing power for cars, houses, retirement plans and so forth, Rutherford said.

“An expanding energy industry in the U.S. and Canada has a ripple effect through the entire economy that’s extremely positive and, yes, we are experiencing it first in real estate issues and real estate markets in places like Edmonton, Fort McMurray, Calgary and in Williston, Hobbs and Midland,” said Rutherford.

Multi-family housing in the smaller centres, including cities such as Fort McMurray, are an issue as the populations suddenly balloon with “guest workers” who require housing.

Williston, for example, had a population of 12,000 before the oil boom and now has about 25,000 temporary workers, according to Rutherford. At the same time, the communities are struggling to expand the infrastructure required to handle the influx of workers.