Google purchase of Nest a signal of change

Search giant Google’s purchase of the smart appliance technology company Nest may signal momentous changes ahead for homes and buildings and how they manage energy, lighting and other integrated systems. 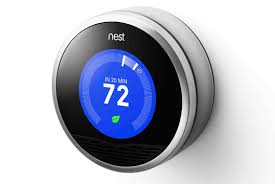 Google recently announced that it would pay $3.2 billion to acquire the firm that has taken “unloved but important devices in the home such as thermostats and smoke alarms” and reinvented them as intelligent machines.

For some time, talk has revolved around the so-called Internet of Things, where the world’s physical objects are connected wirelessly to the web and communicate, update and anticipate changes as required.

The deal between Google and Nest is clearly a step in the right direction, according to experts who weighed in on the deal.

The Economist opined: “Home automation is clearly an important building block in this next stage of the evolution of the Internet, which according to Intel could lead to some 31 billion web-connected devices by 2020.”

And who better to connect them than Nest? The company’s expertise is in creating smart devices out of ordinary household objects.

“Google will help us fully realize our vision of the conscious home and allow us to change the world faster than we ever could if we go it alone. We’ve had great momentum, but this is a rocket ship,” Nest founder and CEO Tony Fadell wrote on the company blog.

The interconnectivity and automation could go far beyond the home, however. “As a company that has long made investments in the energy sector, Google’s ambitions likely extend beyond the home,” Wired.com speculated.

“If the Nest thermostat can help us be smarter about how we use energy in our homes, imagine what it could do for the entire grid.”

In fact, Nest is already making inroads with that latter aspect. The company has partnered with a number of energy providers in the United States to offer what it calls “rush-hour rewards.”

It’s fairly easy to extrapolate the technology’s use in the larger commercial real estate sector and to anticipate blocks of buildings having their temperatures automatically lowered during heat waves and the like.

Fadell said: “Starting a business focused on the lowly thermostat seemed like a crazy idea at the time, but it made all the sense in the world to us.

“That little device that went unnoticed and unchanged year after year on the walls of our homes was a lost opportunity to save energy and money. We knew we could do better.”

That idea led to the Nest Learning Thermostat, a device that learns people’s schedules for heating and cooling homes, programs itself and can be controlled from a phone. Nest says the thermostat can cut heating bills by up to 20 per cent.

The firm then took on the requirement for a smoke and carbon monoxide alarm. Nest’s engineers recognized that people loathe smoke alarms’ loud shrieks every time toast is burnt or their late-night chirps from a low battery.

To the company, the answer was obvious: make a friendlier, smarter device that would ensure people’s safety. The Nest Protect glows orange as an early warning and then turns to yellow. A human voice warns of rising carbon monoxide levels or indicates where the smoke is coming from.

The smoke alarm can also be silenced with a simple wave and can be operated remotely with a smartphone.

Founded in 2010, Nest has more than 25,000 certified professionals who install their products in the United States and Canada and more than 300 employees in three countries.