How can existing buildings, which still comprise 99 per cent of building stock, compete with new high-performance building? 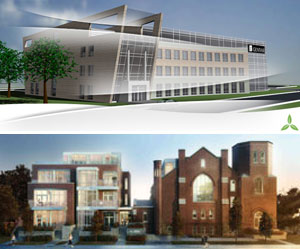 That was the question posed to experts at the recent Green Real Estate Conference in Toronto.

Part one of this discussion was published in last week’s Property Biz and revolved around existing buildings catching up to new high-performance ones. Following is part two:

Is there an industry that’s driving adoption?

Westeinde: “The larger the corporate entity, there’s an increased focus on the implementation of sustainability programs focused on the asset and space requirements. In Toronto, you could say that the banking industry has been a big adopter.

“In a general sense, I think that although it’s not universal in how it’s being requested or how it’s being implemented, because of the availability of space out there, it’s becoming pretty standard that you’re going to be seen with a black mark if you can’t demonstrate performance in one fashion or other.”

Is there one region in Canada that seems to be driving early adopters and dragging other markets with it?

Barbieri, while stating Toronto is leading Canada in sustainability because of all of its new construction, said the federal government’s desire to be in sustainable buildings is driving tenant demand in Ottawa.

“The flip side of that is that Ottawa has historically been a tight market and hasn’t had a lot of room to move, so they ended up with a lot of buildings that weren’t LEED-certified and weren’t sustainable and didn’t meet some other standards.

“But I think that’s changing. Downtown has gone from a two or three per cent vacancy rate several years ago to seven, eight and nine per cent vacancy rates today. There’s room to move and I think it’s becoming very clear that if you’re not sustainable, you’re going to be left behind to some extent as the market continues to evolve.”

What metric would you use to define competitive?

Gray-Donald: “I think it’s analytics of the performance of your portfolio. Looking back in time, can you correlate sustainability to occupancy rates, rent-free periods, renewal rates and tenant satisfaction, and internally come up with strategies in asset and portfolio management on those. Companies that can make those correlations are going to come out ahead.”

Manikel: “Far more tenants care more about the comfort of their building and the well-being of their employees than care about their energy bills. The most successful companies will link energy performance and comfort together and make a case for both at the same time.”

Westeinde: “Your ultimate success is never being vacant and attracting at least market rents and doing what it takes to do that. To do that, you have to be as attractive as possible to the widest pool of potential tenants that are out there. By choosing not to do some of these measures, you’re taking part of the pool from your potential tenant base because they’re not going to look at it.

What are tenants willing to pay for sustainability?

Gray-Donald: “Don’t expect a green premium, but you can expect a discount if you’re not there.”

Westeinde: “All the work you’re doing to substantiate the investment you’re doing in a sustainability program has got to come out at the end of the day looking like it’s costing the tenant nothing, but they’re getting a better product for it. You ultimately look at it through gross costs and how you amortize things and figure out things from an internal payback point of view.

“It’s a very simple equation: You’re getting something better for the same price.”