How do green condo occupants actually use the ventilation sytems?

Many residents of new condominiums don’t fully understand the technology available to them and aren’t taking advantage of the mechanical ventilation systems in their suites. 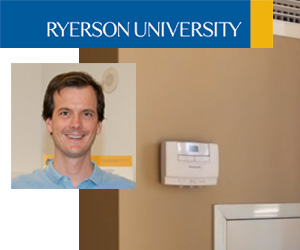 Craig Brown, a PhD candidate in environmental applied science and management at Toronto’s Ryerson University, came to that conclusion after conducting a study involving data from four LEED Gold-certified condo towers in Toronto, built by two separate developers, and occupied for at least 20 months.

Questionnaires delivered to all residents (and returned by 17.8 per cent of them) collected information about how they were using their mechanical ventilation systems, as well as their satisfaction and behaviour within their suite.

They also allowed occupants to consent to releasing consumption data from their thermal, electricity and water submeters. Follow-up interviews and indoor environmental quality measurements were taken in limited suites to provide further insight.

“I’m really trying to understand how occupants are responding to some of these green design decisions in buildings that they find themselves in, whether it’s in the workplace or in the home,” said Brown.

More than half of respondents were found not to use their heat recovery ventilators (HRVs) for a variety of reasons, including: acoustic dissatisfaction; difficulty with the accessibility of filters; inhabitant knowledge and preferences; and lack of engagement with training materials.

These factors led to many occupants choosing passive ventilation via windows and balcony doors over their mechanical system.

“Just by asking people how they’re using their suites and finding out why they’re making certain decisions, we can really understand how they’re interacting with the technology in a way that would have been impossible if we had just taken a quantitative approach,” said Brown, who has done research in residential, commercial and institutional settings.

But no one wants to open a window or door with the bone-chilling temperatures most Canadians have experienced this winter. So those who don’t use their HRVs may not experience the same air quality as those who do, even if they didn’t report it.

“These results suggest that a disconnect exists between the expectations of designers and the thinking and behaviours of inhabitants,” said Brown, who thinks there’s room for improvement in communication and education among building designers, property managers and tenants.

“Maybe the designers haven’t taken into account that people like to open windows or their balcony doors to let fresh air in. . . . If exercising that preference for passive ventilation results in energy loss, I think it’s up to designers to design for that behaviour instead of just hoping that people will use all of the gadgets correctly . . . because we found that they don’t.”

Brown said the study found that one of the four towers had a property management team that changed the HRV filters annually instead of leaving it up to residents, which insured that “if these devices are going to be used, they’re going to be operated effectively or appropriately. It also reminds people that they have this device in their suite.”

Brown recommends that tenants should be familiarized with how the systems work and that property managers take control of filter maintenance.

Brown believes in-suite HRVs are more energy-efficient than centralized ventilation systems and provide filtered air, which is likely healthier for occupants, so he said “they’re still a great idea” despite some of his findings.

“Where there are some new technologies, with people either downsizing from a family home or with renters moving from 80-year-old buildings, there are some things to learn when moving into a nice, brand new, green condo. So I think there’s an opportunity there for some training.

“It’s also important to reach out and get occupant feedback if you want the building to operate as designed to perform well, and if you want to design better buildings in the future.”

Download a summary of the study with link to the original research.