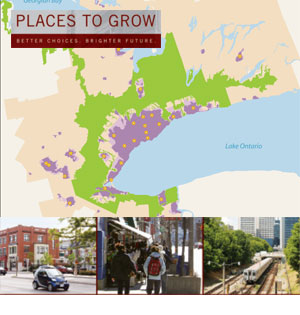 “Growing the Greenbelt, particularly in relation to the protection of water and natural areas and natural heritage, has clearly been a strong theme,” the former Toronto mayor said of feedback received during 17 townhall meetings attended by about 3,400 members of the public, ongoing stakeholder consultations and numerous briefs submitted to the panel.

“There’s a strong push to make sure that we’re protecting agriculture in the Greater Golden Horseshoe. There is also a very strong interest in the development of strong communities in terms of jobs, opportunities, amenities and resiliency in relation to climate change.”

Crombie added people are “looking for powerful investment in road transportation and transit” and there has been much discussion on the governance of a new integrated plan and how it would be administered by the province and affected municipalities.

There is also demand for a new integrated plan to be easy to understand and not written for lawyers, a common complaint about the existing plans.

Many citizens have also asked about the future of the Ontario Municipal Board, but Crombie said the provincial government will strike a panel to deal with that in the future.

Crombie’s panel will make recommendations to the Ontario government in September. Politicians will take them into consideration, come up with policies and then undertake more consultation before ultimately producing legislation next spring.

David Caplan was the minister of public infrastructure renewal in former premier Dalton McGuinty’s government and was responsible for 2005’s Places to Grow Act which ensures growth plans reflect the needs, strengths and opportunities of the communities involved, and promotes growth that balances the needs of the economy with the environment.

Caplan was also on stage with Crombie and said the act “wasn’t simply about infrastructure investment. It was about transportation, environmental protection, agriculture and economic development and so many other aspects so that we needed our sister ministries to cooperate and work together to a degree which to my knowledge and experience it had never done before.”

Caplan believes things have proceeded fairly well from a conceptual standpoint, but conceded there were things that could have been done better.

He said some municipalities were more prepared and easier to work with, and those that weren’t tended to cause a drag on progress.

Moderator Neil Rodgers, executive vice-president of acquisitions and land development for Tribute Communities, pointed out one of the policy thrusts of A Place To Grow was to increase intensification along transit corridors, but density and growth in the Greater Toronto Area haven’t necessarily aligned with transit and infrastructure investments.

Crombie agreed with Rodgers’ assessment that the more targeted approach to this issue taken in Vancouver and British Columbia has been more successful.

Caplan said securing transit investment was difficult and that municipal politicians pushed their own transit plans at the expense of a more comprehensive overall strategy, but he thinks there’s now more cooperation through Metrolinx (which will have its own review next spring) and that density will eventually follow along transit corridors, which will draw developer investment.

“And one of the things that we’ve consistently said we want is pre-zoning along transit corridors.”

The panelists agreed that the potential recreational and eco-tourism benefits that can be provided by protected Greenbelt lands haven’t been adequately publicized or marketed, which has prevented it from reaching its full potential.

Rodgers pondered if so-called “whitebelt” land — locations where urban expansion and intensification can occur to accommodate increased population and optimize the use of existing and planned infrastructure — should also be protected in similar ways to the Greenbelt.