The Canada Green Building Council (CaGBC) and Canadian Coalition for Green Schools are urging Canadian schools to pursue sustainable building programs and motivating them with cash through a new contest called the Greenest School in Canada. 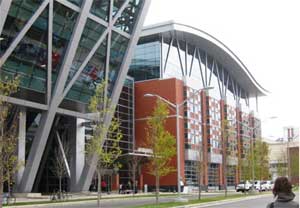 The contest, announced on Earth Day, April 22, challenges schools to identify, prioritize and make changes. According to a CaGBC news release, a green school is defined as “one that minimizes environmental impact, optimizes human health and performance, and fosters a generation of environmentally literate students.”

“Greener schools are showing important benefits for students of all ages,” said Thomas Mueller, president and CEO of the Canada Green Building Council.  “For example, improved indoor air quality results in a reduction of up to 65 per cent in asthma cases among elementary students; schools with good daylighting see a 10 per cent increase in student performance; and green schools show a three per cent reduction in teacher turnover.”

According to Mueller, the competition is intended to engage and recognize educators, students, parents and officials committed to providing a healthier, greener future for youth.

Schools will be judged according to their efficient use of resources and reduced environmental impact; enhanced health and learning among students, teachers and staff; and a demonstrated emphasis on sustainability and resource-conservation education.

The contest submission form asks for information about the environment as a tool in curriculum and on field trips, asks for noticeable changes in sick days and seeks input about involvement in community initiatives and resource reduction. Applicants are also asked to describe a typical classroom in terms of daylight, access to recycling and indoor air quality.

(The SAIT Polytechnic Trades and Technology Complex: Aldred Centre shown in the picture, located at 1301 16th Ave NW in Calgary, was certified as a LEED Gold building in September 2013.)

The importance of creating healthier sustainable school environments has been the focus of governments across the country in recent years. In Ontario, the provincial government has created a Green Schools resources guide. Beginning with designing a green school to occupying and operating a green school, the guide includes case studies and benchmarks and has been developed “specifically for Ontario school boards, based on a review of more than 250 articles, papers and websites on green schools from Canada, North America and worldwide.”

The Ontario Government has also allocated funds to help achieve sustainablity goals. In March, the Ontario Government announced more than $700 million in Capital Priority approvals to school boards for projects over the next three years, including retrofits to existing schools. In 2009, it allocated $550 million through an Energy Efficient Schools investment. In 2011, it invested $50 million by providing the funds to public school boards who were installing renewable energy technologies for heating or cooling or generating electricity.

Other organizations help pick up the demand for curriculum-based solutions intended to increase awareness and create new generations of graduates who are more environmentally savvy. Ontario EcoSchools and GREEN Schools, for instance, offers program and curriculum support.

Pioneered in the U.S.

The Canadian greenest school contest mimics a similar program pioneered by the U.S. Green Building Council and their Centre for Green Schools. The U.S. website for the school program notes that “approximately 25 per cent of Americans go to school or college every day as students, teachers, staff, faculty and administrators” attendance levels at schools that are likely similar in Canada.

The U.S. website notes The U.S. Center for Green Schools was established to drive the transformation of all schools into sustainable and healthy places to live, learn, work and play.  It is their belief attending school should have the ability to learn in green buildings.

The contest for Greenest School in Canada closes in June at which time a jury of green building industry experts from across the country will review submissions. The top three winning schools will be announced in September.

The contest is open at both the elementary and high school level.  The winner will be awarded $2,000 towards a green activity and will be entered in the Greenest School on Earth Competition . Winners of the international competition, sponsored by the Center for Green Schools at the U.S. Green Building Council, will receive $5,000 towards a new or ongoing sustainability project.