Greater Toronto Area markets with more than 60 per cent of their total office space within walking distance of public rapid transit have a higher average rental rate and lower average vacancy rates. 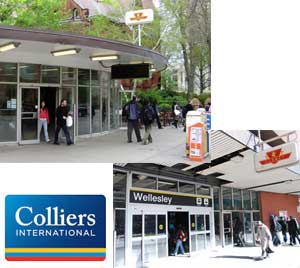 Demand for this space is also increasing.

“Only 45 per cent of all office space in the GTA is within walking distance of a rapid transit station,” said Colliers International market intelligence coordinator Shawn Gilligan, who authored a new report on Toronto rapid transit and commercial real estate.

The report analyzed office leasing and transportation within the GTA and indicated employees are increasingly looking to abandon cars and work within 400 metres (which it defines as walking distance) of a rapid transit station. This has led to an increased demand and willingness by employers to pay a premium for office space meeting these standards.

“In the actual City of Toronto and the immediate suburbs in the GTA, there’s not a lot of room to grow with regards to highways,” said Gilligan. “If the city continues to grow, I can only see that commute times will increase based on what’s taken place.”

The downtown, midtown and central north markets in the GTA, with more than 60 per cent of their office space within walking distance of public transit, are seeing higher asking rental rates, lower vacancy rates, quick pre-leasing and a willingness to pay higher rents by tenants.

“Even when we look at non-downtown markets, the average building size for walking distance space is quite high,” said Gilligan. “When you look at Lawrence and Yonge, Kipling and Bloor or Scarborough Town Centre, although it’s not a huge amount, the space that’s within walking distance of a rapid transit station has a higher average building space and we’re seeing lower vacancy rates and higher rental rates for those spaces.”

The average rent for GTA buildings within walking distance of a rapid transit station is about seven dollars higher per square foot.

More than 2.5 million square feet of class-A office space under construction in the GTA is within walking distance of a station, and these building clusters are expected to continue to outperform other classes in less convenient transit locations.

Just 18 per cent of GTA office space is within walking distance of proposed or under-construction transit stations because numerous complexes were built closer to highway interchanges and relied on cars for transportation.

Twenty-five per cent of the current office space within walking distance of proposed transit stations is class-B and could be redeveloped to take advantage of being near the transit extensions.

How all of this plays out in the long term will be dependent on what the City of Toronto decides to do with public transit expansion and how developers, businesses, building owners and managers react to those moves.

In the shorter term, however, the under-construction, 19-kilometre Eglinton Crosstown light rail transit line presents an area of opportunity in the Don Mills Road and Eglinton Avenue area.

The office buildings within this area, which also has easy access to the Don Valley Parkway, are spread out, low-density and primarily class-B. They could be redeveloped to increase density within walking distance of the eventual stops.

The recent announcement that the large Celestica site at the corner of Don Mills and Eglinton was sold to a consortium of developers who aim to create an office, retail and residential mixed-use community shows such plans are already taking shape.

The Airport Corporate Centre in the western part of the GTA has about six million square feet of office space and has been experiencing high vacancy rates. The report suggests vacancies could come down with the completion of mayor John Tory’s proposed SmartTrack plan, which claims it would cut public transit travel time between that market and downtown from 65 to 24 minutes.

Only one existing building in the Airport Corporate Centre would be within walking distance of a proposed SmartTrack stop, though there may be incentive to attract tenants to the area by connecting the current office stock and developing new, higher-density, transit-available space close to the proposed station.

“The labour pool within 30 minutes of the Airport Corporate Centre, especially on public transit, would increase by a large amount,” said Gilligan.