A Natural Resources Canada building in Hamilton was recently recognized for its performance and creation with a Brownie Award, which honours the best in brownfields development.

The award, in the category of best large-scale project, was given by the Canadian Urban Institute to Diamond Schmitt Architects, which designed the Canmet Materials Technology Laboratory, and the McMaster Innovation Park, which houses the facility along with other buildings just west of Hamilton’s downtown core. 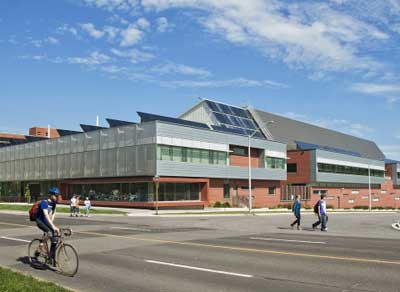 The building took 18 months to build at a cost of $69 million, said Zach Douglas, president of the McMaster Innovation Park, which leases this facility to the federal government.

Among the work being done here is research into building vehicles that are lighter and therefore more fuel-efficient, and pipelines that can withstand more pressure from higher volumes of oil and gas.

Glenn Miller, vice-president of the education and research for the Canadian Urban Institute, said the judges who picked the 165,000-square foot Canmet laboratory for this award “were very complimentary of the actual performance of the building, but what made it interesting in terms of a Brownie Award was the impact that it’s having on the progress being made in the park itself. It’s sort of become the new anchor.”

“The level we’ve achieved, LEED Platinum, puts us roughly 70 per cent more energy-efficient than something that would’ve been built to code,” said Philippe Dauphin, director general of Canmet Materials.

The McMaster Innovation Park’s policy is that all new buildings must be built to at least LEED Silver standards.

Cleaning up after the past

This park sits on land where there had been about 100 years of previous industrial activity. There are currently three buildings there. Along with the Canmet facility, there is also a main atrium building, opened in 2009, that hosts several businesses ranging in sector from energy development to technology to insurance. There is also the McMaster Automotive Resource Centre.

The Canmet building was the second of three buildings created there. Douglas described the rehabilitation of the site that preceded development there as “challenging.”

“There’s a tendency on brownfield sites to just dig and remove the material, and ship it offsite somewhere to be left or handled by others,” he said. “We used a risk-mediation approach, a risk-management plan approach, where we handled the contaminants onsite, and we planned the whole park, not just the Canmet building, to manage those issues by relocating and capping and managing any hot spots, if you will, on the park as opposed to the dig-and-dump scenario.”

In other words, contaminated soil was moved to areas within the park, such as under roads, and contained in ways that would pose no hazards.

Douglas added that the whole park is served by a district energy system, which transfers geothermal energy for heating and cooling. He added that the Canmet building makes use of solar panels for much of its heat as well.

Adding to the building’s energy-efficiency is a design that lets in ample natural light and detectors that adjust the artificial lighting with the level of sunlight that’s coming in.

Douglas said the heating and cooling is done through radiant piping through the floors, which lessens the need for heated or cooled air to be circulated.

Dauphin noted that the ventilation that does occur involves fresh air coming in from the floors and old air getting exchanged up high, which maximizes the quality of the air breathed by the facility’s approximately 100 employees and minimizes the energy needed to circulate the air.

He added that rainwater is harvested for toilets and the watering of plants.

Dauphin said the move of this facility to Hamilton from Ottawa two years ago presented an opportunity for Natural Resources Canada to showcase its know-how and show leadership in the area of sustainable development.

“Natural Resources Canada promotes the sustainable development and use of our natural resources,” he said. “When the opportunity came to relocate the lab to Hamilton, they said we’d like to use this as a way to show that we can design a building that will outperform anything that’s being built right now.”