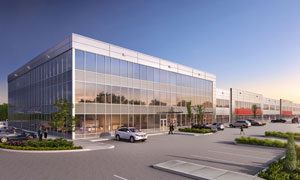 Michael Hungerford, a co-partner in the firm with his father and brother, says green industrial development strives to create work-friendly buildings with longevity. He adds sustainable industrial developments can provide lower operating costs and a better work environment for people in the building.

A green industrial property is Hungerford’s goal for the  Nexus Business Park under development in northeast Calgary. “I think it’s generally a trend where the market is heading,” Hungerford says.

However, Hungerford says that unless the tenant or market demand specifies a requirement for the certification, the developer doesn’t feel the need to certify the building.

“It’s nice to have that recognition and some companies require it,” Hungerford acknowledges. “For this project, no, we didn’t go through the certification. It actually adds more cost and we don’t think our users see that benefit of having that actual certification.”

What LEED brings to a development project

Since 2002, the Canada Green Building Council (CaGBC) and LEED Canada have been offering its point-based rating system; points are earned for building attributes considered environmentally beneficial.

The LEED program requires third party verification for an internationally recognized set of criteria that measure the level of ‘green’ a building achieves and maintains.  There are processes that are part of  LEED such as building commissioning, building material requirements, and most recently life cycle analysis and re-certification that all contribute to the rigour of the program.

In the absence of LEED, or another green certification program, a purchaser or tenant of a new building would need to conduct their own ‘green analysis’ to confirm a property owners claims about sustainability.

Nexus isn’t Hungerford’s only ‘green’ building. The developer has a LEED-certified staff who begin any project by examining the green benefits at the design stage. The company is also known for renovating existing buildings that might not look particularly promising at the onset.

“On the green trend, that’s certainly one of the greenest decisions that can be made, rather than tearing down and sending it off to the landfill, being able to reuse and adapt existing buildings,” Hungerford notes.

The company bought the former Haworth Building in Calgary in 2013 for an undisclosed price and set about rehabilitating the 761,000-sq.-ft. space and rebranding it as the Icon Business Park. Hungerford points out that the Haworth Building is one of the largest in Western Canada and one that sat empty for many years.

“I think the market had a difficult time envisioning how to reuse and readapt that building. We have a vision and a plan and we’re executing to that and it’s leasing up now. That’s a great example of a green project which some people might have looked at and said, ‘Well, sometimes it’s easier to tear something down and start over again.’ ”

Hungerford says to develop the green mindset, three things are important. First, developers need to be open to change and making trade-offs. “You don’t always have to do things the same way as you’ve always done them.”

Secondly, he says developers need to ask for options or else consultants will automatically assume they’re looking for the lowest cost. Hungerford says it’s important to question consultants about alternatives that might be more sustainable and come with only a marginal cost impact.

Thirdly, developers should measure benefits differently and over a longer period of time. Hungerford says the industry should consider the human as well as the economic benefits of green decisions.

A stormwater management system harvests rainwater for use in irrigation and toilets, while extra deep soil coverage prevents excess runoff to storm sewers. Energy Star heat pumps provide precise and quiet heating and cooling for the building. More than 300 plants and 67 trees have been planted to provide shade.

Hungerford concedes the features add a small increase to the overall price of the building, but believes the long-term economics more than offset the extra expense.

The developer points out that industrial buildings are less complicated structures than offices, but they are also large in space. “They can throw off a lot of energy,” Hungerford notes. “If you’re heating a huge volume of space, using a huge amount of water, whatever the resource is, it can have a tremendous impact.”

According to Hungerford, some industrial buildings – particularly those in manufacturing – can have employee numbers comparable to office buildings. However, in buildings that deal with logistics, for instance, employee numbers may be quite low while the volume of space is significantly larger than in an office.

Currently, tenants aren’t actively seeking out green industrial. Hungerford says for small and medium-sized businesses price, location and whether the space meets their business needs are the top priorities. “I do think if they’re given the option and they’re educated on it, they’ll appreciate it and it will tip the scale in favour of a project that has these features,” he says.