The dates probably weren’t marked off on most people’s calendars, but Nov. 7 to 9 were designated as the 11th annual “International Passive House Days.”

The occasion wasn’t lost on Marken Design + Consulting, which showcased homes in Vancouver and Surrey, B.C. that were designed and built to use up to 90 per cent less energy for heating and cooling while providing superior comfort and indoor air quality. 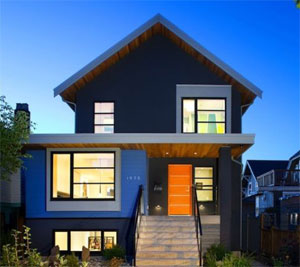 The passive house building energy standard originated in Germany in the late 1980s and is quickly becoming the world standard in green, sustainable building techniques. The term “passive” refers to the absence of a traditional furnace, although there are often heat-recovery ventilators that capture warmth in stale outbound air and transfer it to incoming fresh air.

It’s estimated there are more than 50,000 passive house buildings in more than 35 countries, but only about two dozen in Canada have achieved this level of energy efficiency. Such well-insulated, low-maintenance houses are created to be as airtight as possible and include features such as solar hot water, rainwater harvesting for toilet flushing, high-efficiency heat recovery ventilation, triple pane windows, green roofs and non-volatile organic compound materials.

This was the second time Marken participated in International Passive House Days, and the two properties attracted a combined total of about 250 visitors. That’s down slightly from last year, but Marken principal Alex Maurer was happy with the turnout and attributed the decrease to many people checking out the Surrey house in 2013. (Image shows 1950s constructed house renovated to the Passive House standard by Marken.)

Surrey’s first passive house, located at 1702-156A St., won the New City Design Award this year. The owners have lived there for more than a year and welcomed visitors for six hours on Nov. 8 to share valuable lessons learned on the living standard, economics, comfort and various do’s and don’ts.

“One of the major hesitations associated with ultra-low energy buildings is the construction costs,” said Maurer, a leading expert in passive house design and planning who was educated in Germany. “With a little innovation, homes can be both energy-efficient and affordable.”

Maurer said passive housing costs between zero and 10 per cent more to construct than traditional buildings in Canada, but energy cost savings and security against rising fuel prices make them more economical in the long run.

“The passive house in Surrey, for example, had similar construction costs as a traditional house — about $200 a square foot. But the owners haven’t had to turn on the heat at all in one-and-a-half years. The hydro bill is $60 a month.”

The passive design features of Vancouver low-energy, infill home “Casa Pasiva,” which is under construction at 919 E. 15th Ave., were highlighted at an open house from 10 a.m. to 4 p.m. on Nov. 9. It was planned along passive house design principles and is the most airtight building in Vancouver with a rating of 0.3 air changes per hour (ACH). An average new home is rated around three ACH while an “efficient” home is closer to 1.5 ACH.

The two Marken structures opened to the public on the weekend are among the nine Canadian buildings (eight in B.C. and one in Fort Saskatchewan, Alta.) included in the international passive house database.

Other passive house projects in Canada

Marken is one of North America’s leading passive house building design and consulting firms, with more than a dozen projects completed or underway. It designed the “Rainbow Prefab Duplex” in Whistler, B.C., the first “built in Canada” residential project certified by the International Passive House Institute in Germany. Marken’s other passive house projects can be found here.

There are passive house schools, office buildings, supermarkets, retail centres, gymnasiums, health clubs and thousands of apartment units in Europe. The largest apartment development is the Lodenareal complex in Innsbruck, Austria, which has 354 rental apartments and 128 condominiums built and certified to the passive house standard.

The European Union passed a resolution in 2008 calling on each member state to adopt the passive house standard by 2016 for all new construction and major renovation projects.

Canada isn’t as far advanced, but is making slow progress. The Canadian Passive House Institute (CanPHI) is a registered non-profit educational organization that’s trained more than 500 Canadian builders, architects, engineers, tradespeople, planners and homeowners in passive house design and construction since 2010. It has more than 150 members across the country

“Canadians have enjoyed decades of cheap and plentiful energy supplies, and so our buildings, vehicles and communities naturally reflect this (i.e. they are not very efficient),” says a section on the FAQ page of the CanPHI website. “Yet it’s becoming ever clearer that there are serious climate change and energy supply implications to our wasteful use of fossil fuels and electricity.

“Clearly, it’s time to update the ways in which we use energy. The physical reason why our houses perform much less efficiently is that they’re constructed with insufficient insulation and relatively poor quality standards and components. Standard design practice is to insulate only modestly, as building codes allow, then install a large furnace (and often an air conditioner).

“Yet this is a design approach from the 20th century, not the carbon-conscious 21st! The Passive House approach has shown that you don’t need a conventional furnace or boiler to achieve high levels of comfort and indoor air quality in any building, if you design that building correctly in the first place.”

Grants are available under the federal Energuide program to assist in energy-saving renovations, but passive house performance goes well beyond existing programs and isn’t supported. CanPHI members are lobbying the federal and provincial governments to offer incentives to builders and owners of passive houses.

“I feel hopeful that in the next few years there will be certain incentives included in building bylaw changes,” said Maurer. “I think it’s important that building codes recognize energy-efficient housing more than they do right now.

“I think governments should do more to promote it. It’s a win-win for the government and for people who live in the buildings.”

The private sector also has to embrace the long-term advantages of passive housing and make a bigger commitment to it, according to Maurer.

“North America is very investment-driven. People look very much at construction costs, but not as much at operating costs.”