Atlantic Canada may be lagging when it comes to sustainable building, but that’s rapidly changing thanks to legislation and market acceptance.

It’s been 12 years since the Canada Green Building Council (CaGBC) introduced the LEED certification program into Canada. Today, the rating system that measures excellence in green building is becoming commonplace with the CaGBC beginning to roll out the fourth version of the program.

The CaGBC has certified more than 1,400 buildings in Canada and registered more than 4,000, the second-highest number in the world. But even with LEED legislated as mandatory for new construction in provinces such as Nova Scotia, it’s evident how much further the industry still has to go, particularly in Atlantic Canada.

While Ontario has 1,680 buildings either certified or registered, British Columbia has 854 and Alberta has 642, the Atlantic provinces as a whole have only 252. Nova Scotia leads the Atlantic region with 150 projects, followed by Newfoundland & Labrador at 57, New Brunswick, 48, and Prince Edward Island, seven.

Lara Ryan, executive director of the CaGBC’s Atlantic chapter, insists the region is making progress in the application of LEED. “We certainly aren’t seeing the growth LEED buildings are seeing in the other parts of the country,” she said. “I think that’s indicative of the size of our market (in Halifax) compared to Calgary or Toronto, for example.”

That will change, though, as new buildings continue to rise. Since 2011, both Nova Scotia and the City of Halifax have legislated that any new projects must meet a standard of LEED Silver, with Gold targeted for some. In the past year, Nova Scotia Power opened its new headquarters, a sophisticated LEED Platinum building (shown in image above).

Ryan said LEED comes with a dramatic learning curve for developers, but that it is easier once they complete one or two buildings and become more confident with working with the standard.  The market is demanding – not just for government buildings, but commercial buildings – that LEED is the standard, Ryan noted.

“If they’re not building LEED, they’re certainly talking about the green elements in their buildings,” she said.

When it comes to choosing between LEED and BOMA BESt for certification, Ryan suggested a lot of building owners are choosing to go through both processes. In Atlantic Canada, where there are so many historical buildings, BOMA BESt is a viable option, Ryan pointed out.

“The great thing about BOMA BESt is you can use an existing building. We do have a LEED program for existing buildings, but it’s more rigorous,’’ she said. “It requires renovation and all that.”

Renovating structures in Halifax can often turn into a costly, time-consuming endeavour for developers who face stringent guidelines about the types of changes they can make to historically designated buildings.

The Grainery Lofts started a trend

Among the buildings achieving LEED status in Halifax are The Grainery Lofts, which became the first privately owned and developed multi-residential building east of Montreal to gain LEED Gold status. Southwest Properties developed the condominium project in the city’s South End. 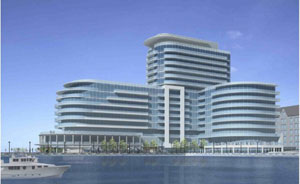 In April, the Combined Services Complex at Halifax’s Stanfield International Airport received LEED Silver. The building consumes 30 per cent less energy than a non-LEED certified building of the same size, and water-efficient fixtures have resulted in a 46 per cent decrease in water use.

Downtown, TD Centre Halifax is undergoing an upgrade that will see it double in size to 200,000 square feet while attaining LEED Gold status. And developer Wolfgang Thiel is moving ahead with plans to build a 500,000-sq.-ft. multi-use project that will target LEED Platinum certification.

A number of other buildings are in the works, including the proposed, $75-million,16-storey Cunard Block project, which would obtain LEED Gold status for the 250-apartment, multi-use building (shown in adjacent image).