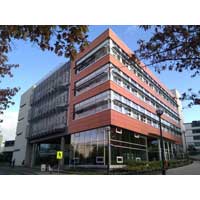 Ontario led with 221 newly certified projects followed by Quebec with 121, British Columbia with 87 and Alberta with 78,  according to a February report from the CaGBC.

There are now a total of 1,484 buildings certified by the CaGBC.  In 2013 there were 598 new projects that registered to pursue certification bringing the ‘all in’  total of registered  and certified projects at the CaGBC to 4,685.

Mark Hutchinson, director of Green Building Programs for the CaGBC, said in a statement the steady increase in both large and small projects receiving certificates shows the value of the LEED rating system and certification process to the building industry.

Hutchinson pointed to the large number of projects attaining the highest levels of LEED in 2013 as proof the industry has the skills, knowledge and technology to produce high-performance buildings at a reasonable cost and effort.

Buildings to boast about

The CaGBC singled out several buildings as the year’s highlights in LEED construction:

* The Nova Scotia Power Headquarters in Halifax, known as 1H, became the first certified LEED Platinum building in Atlantic Canada last March. The building is a former thermal generating plant converted to office space and which incorporates features such as chilled beams that decrease energy use while increasing heating comfort.

The renovation led to energy and water savings of approximately $650,000 annually. Other features of the building, which won a Lieutenant Governor’s Award for Excellence in Engineering, include a white roof to keep the building cool, and an energy-efficient façade.

* The University of British Columbia’s Centre for Interactive Research on Sustainability (CIRS) (shown in image above) gained LEED Platinum certification in September. The Vancouver building is a showcase of green construction with living green walls and roof, and advanced energy and water reclamation systems.

* Oxford Properties’ MetroCentre at 225 King Street West in Toronto because the first Canadian multi-tenant office building to receive a second certification under LEED for Existing Buildings. Originally certified as LEED Silver in 2008, the building achieved LEED Gold in 2013.

A searchable list with details on all LEED projects can be viewed on the CaGBC LEED Project Profiles webpage. The CaGBC launched the database in September 2013.

The Alternative Compliance Paths for LEED v4  will be launched in Canada at Building Lasting Change 2014, the CaGBC’s annual national conference in Toronto on June 2-4.