In Greek mythology, Athena is the goddess of wisdom, courage, inspiration and civilization. She also rules over the arts, craft and skill. Given the her attributes, you begin to understand how the non-profit Athena Sustainable Materials Institute in Ottawa arrived at its choice of name. 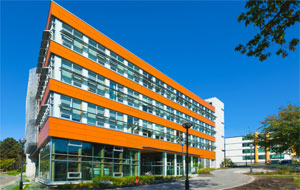 Like the goddess, the institute brings considerable craft and skill to its work, which is the development of life cycle assessment (LCA) data for construction materials and systems, along with LCA-based software tools.

Recently, the institute released version five of its acclaimed Impact Estimator for Buildings. The software essentially allows users to construct their building from the ground-up within the software environment.

Architects working on behalf of commercial developers, for instance, can select their foundation, columns and beams, windows, walls, roofs and more and identify which particular aspects of the building will have the largest environmental impact. It then allows builders to focus in on those areas and make changes to the building to ensure they have the greenest structure possible.

“It’s not for the faint of heart,” jokes Jamie Meil, co-founder and managing director of Athena and the prime developer of the software. He says design professionals can get up to speed on the software in three to four hours through an online tutorial.

The newest version of the software features updates which are keeping up with the latest advances and thinking in sustainability. For design teams going after green building LCA credits, the software incorporates new reports for LEED v4, Green Globes, The International Green Construction Code and other similar green building rating programs.

As well, professionals can now incorporate a number of new materials such as green roofs and insulated metal panels into their designs.

Such changes to the software have come at the request of the users, according to Meil, who notes that the program has undergone a lot of changes since its first release. “The software first came out in 2002,” Meil says. “And at that time it was what I’d call a glorified Excel spreadsheet.” Now he calls the program “a very comprehensive and integrated package.”

Currently, about 3,500 professionals use the software. But Meil notes that about 40 universities currently employ the software as a teaching tool, educating engineers and architects about the environmental impact of products and how those products might be put together in the design of a building.

“When you’re into the environment, you’re into it for the long term,” Meil asserts. “Those people who become familiar with our tool and understand LCA, those are the ones who are going to eventually make the largest impact on getting that type of life cycle thinking into the development areas, whether it’s infrastructure or buildings.”

The software itself has been used in the design of numerous buildings, including the Raleigh-Durham Airport Terminal 2, the Rideau Valley Conservation Centre and the Centre for Interactive Research in Sustainability (CIRS) (shown in picture above). The latter building on Vancouver’s University of British Columbia campus was able to successfully gain LEED Platinum status and petal recognition with the Living Building Challenge in part from the use of Athena’s LCA software.

The architects used the software to assess the impacts of different structural systems, different cladding systems and to measure the building’s construction carbon footprint.

The institute has completed over 300-ISO LCA and life cycle inventory (LCI) studies. They include the first industry-wide LCI of PVC roofing in North America for the Chemical Fabrics and Film Association; the LCA of Canadian and US precast products; and preservation versus new construction LCA.

The big thing right now for the institute is environmental product declaration, Meil says. Companies are trying to comply with demands from the architectural and design community to be more transparent about the products they provide for construction, according to Meil.

“Now we’re helping companies instead of having a lot of rhetoric and greenwash, they’re actually getting down to the science, looking at the performance of their products and we’re helping them convey that in a scientifically credible way,” says Meil.