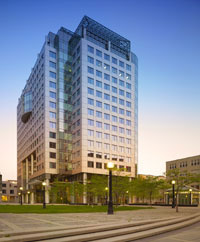 According to Oxford Properties Group Inc., Toronto now has 96 LEED-certified offices, representing a 95 per cent increase since 2013.  Of the 96 offices, more than two-thirds are Gold and Platinum rated.

By comparison, New York, also recognized as a leader in sustainable offices, only 53% of LEED-certified buildings have achieved the same Gold and Platinum ratings based on USGBC statistics.

In absolute terms, 42 Toronto offices have achieved LEED status since 2013, comfortably outpacing New York (with 30) and far ahead of Los Angeles (with just seven).

“Thirty-five years ago, you could smoke wherever you wanted, believe it or not,” said Andrew McAllan, Oxford’s managing director of real estate management who was once a smoker. “It seems unimaginable now … elevators, offices, airplanes. The first step in Toronto was to ban smoking in elevators.

“Today, we don’t let people smoke within 20 or 30 feet of an entrance. We are seeing the same type of evolution in sustainability, it is just happening at a much faster rate.”

Oxford’s sustainability leader is all business

McAllan wasn’t always an environmental proponent either.  After seeing signs of green building industry in the U.S. nearly a decade ago he discovered that most new buildings in Toronto and much of the rest of Canada were going to pursue LEED.

“I realized that environmentalism, sustainability was on the cusp of entering the mainstream,” said McAllan, who is also chairman of the Canada Green Building Council. He also noted that green real estate people are hard-headed business people.

“I’m part of an organization that is in the business of paying pensions (referring to Oxford’s ownership by OMERS – the Ontario Municipal Employees Retirement Systems pension fund). We are not a charity. So this has to be good business.”

McAllan points to 225 King Street West in Toronto as an example of what a motivated landlord can do with an existing building (shown in the image). Tenant Sun Life Financial Inc. announced that it was moving out of the tower that had been its home for two decades and was relocating south to One York Street when that building opens in 2016.

“I thought here was an opportunity to positively differentiate that property by being LEED-certified,” he said. Oxford set out to seek a LEED for existing buildings certification for the 16-storey building built in 1991.

The environmentalist in McAllan comes out not when he brings up newly built office towers such as in Toronto and Calgary. He sees the real opportunity for greener real estate in the existing inventory of 68,000 commercial buildings that produce about 28 per cent of the country’s greenhouse gas emissions.

“Those buildings have to be addressed,” he said.

The effort by mostly deep-pocketed property owners to upgrade the energy efficiency of existing office portfolios has already created a “have and have-not” sort of division.

“Buildings that have embraced sustainability and all the other good practices that go with that are very much differentiated from those that haven’t. And frankly, in our business you can’t afford to be left behind . . . not when you own properties of the ilk that we own.”

He can remember not too long ago when Oxford went from having only one LEED-certified project. Today about 60 per cent of its office portfolio is LEED-certified.

The Oxford executive describes the company’s sustainability efforts as a form of “future-proofing.” Its buildings will have an easier time staying full if they offer the latest and greatest amenities (and lower operating costs) than comparable, non-upgraded buildings. Oxford’s tenants will also have an easier time attracting top talent who want to work in efficient buildings.

Property owners also have little excuse not to go green, he said, as economics have moved such projects from the fringes to the mainstream.

“It is a lot easier to economically justify these projects because money is cheap, return expectations are lower than ever. So having a project that pays for itself over seven, eight, 10 years is a good investment.”

It’s also top of mind with tenants, he said, adding it is typically a topic of conversation. “I met all day yesterday with a large, large American investor with whom we are co-investing in America and in the first half-hour they were going into our sustainability practices. I’m glad to say they were happy.”