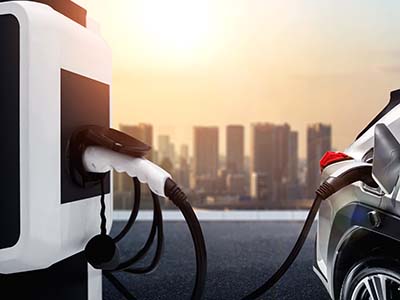 A graphic of the average electric vehicle that would be aided by mCloud’s AssetCare. (Courtesy mCloud Technologies Corp.)

mCloud Technologies Corp. (MCLD-X) has a 20-year agreement with Carbon Royalty Corp. to fund installation of its AssetCare platform in auto dealerships in the U.S. The partners hope to install at least 500 of the systems by the end of 2023.

The AI-powered and cloud-based AssetCare platform is designed to optimize asset management and electric vehicle (EV) charging efficiency at the dealerships.

At the end of March, both companies finalized funding for the first 30 dealerships in New York and California.

Carbon Royalty will fund the installations in exchange for 50 per cent of the tax incentives, carbon credits and other financial benefits.

Barry Po, mCloud’s chief marketing officer and executive vice-president, told SustainableBiz that while the specific amount of dealerships in the agreement isn’t currently covered beyond the end of 2023, mCloud is targeting at least 2,000 auto dealerships in New York and California over the next few years.

“If you take a look at our capacity to influence and have an impact in the auto dealership world, 500 is almost just scratching the surface, right?” said Po. “There’s a ton of opportunity there.”

The Calgary-based company has an additional 21 auto dealerships already signed to individual contracts for AssetCare. Among them, mCloud recently announced a contract with the Vail Buick dealership in Bedford Hills, N.Y.

How the AssetCare will help

In December, mCloud signed a three-year agreement with Slate Asset Management to install AssetCare in Slate’s Life Plaza office tower in Calgary, Alta. In buildings, the platform monitors air quality, controls ventilation and models the potential of viral infection among other tasks.

It performs similar functions in auto dealerships, and ensures onsite EV charging will be optimized by utilizing energy at the lowest possible carbon footprint. This info will be online and accessible to employees and customers alike, including via a phone app.

A July, 2021 report from MIT’s Energy Initiative stated without a fully renewable grid, a U.S. EV emits about 200 grams of CO2 per mile. Sergey Paltsev, one of MIT’s senior scientists, told CNBC at the time that could be reduced to 50 grams of CO2 by 2050 with a clean grid.

“As a carbon (focused) company, the ability to generate carbon offsets through this technology was really what attracted us,” said Amber Brown, Carbon Royalty’s president.

She also praised the reliability of the data available to a customer.

“Not only on the de-carbonization, which is really significant when it comes to the transportation sector, but also on the different attributes that you can get from the carbon commodities,” she continued, “whether it’s renewable energy certificates, carbon offsets or even low-carbon fuel credits.”

Po said AssetCare can factor in the source of electricity based on time of day, and the demands on the larger electrical grid.

mCloud has been aware of the potential for its solution in EV dealerships, but needed a partner like Carbon Royalty to make it possible financially. The two companies were brought together via a mutual contact, a stakeholder in Carbon Royalty who was familiar with mCloud and made the introductions. From there, Brown and Po both said the agreement took around 30 days to iron out.

Carbon Royalty, based in Wilmington, Del., has assets under $5 million. From 2018 until this January, Brown worked at National Bank Financial where her last role was an ESG and sustainability analyst.

Through AssetCare, Po said the company was already gathering information from the grid and had the “demand response capability.” All that was needed was to adapt it to the needs of EV dealers.

Po said the agreement the Carbon Royalty offset some of the capital costs involved in bringing the hardware onsite, along with ongoing maintenance and operation.

“One of the things that mCloud was doing as we pursued our EV strategy here, was recognizing that we couldn’t go to market on our own,” he explained. “We realized that there was a really good fit (with Carbon Royalty) not just from a financing and capital point of view, but from a mindset and philosophy point of view.”

The company is also looking to implement the platform at Canadian dealerships, with Po saying there are “already activities in the works there.”

According to a recent Reuters report, less than one per cent of cars in the U.S. are electric. However, the same report predicts 45 per cent of new car sales could be electric by 2035.

Currently, there are about 104,000 public EV chargers in the U.S. A federal infrastructure bill passed in November, 2021 included $7.5 billion to install a half-million charging stations around the country.

With both the U.S. and Canada having set net-zero emissions goals between 2030 and 2050, Po sees mCloud’s EV strategy as essential to that transition. A potential way for the AssetCare solution to fulfill that role is in helping to monitor the carbon footprint of electricity over time, something he says could be used at the policy level.

Nicholas Sokic Waste Li-Cycle International Apr. 8 2022
Nicholas Sokic Business reporter
Nicholas Sokic is a freelance, Toronto-based journalist. He has covered a number of sectors, including business, finance, crypto, health, cannabis and culture. He graduated from Western University's Master of Media in Journalism and Communications program in 2019.