In an effort to help commercial and retail properties set performance benchmarks and improve practices, the Recycling Council of Ontario (RCO) has launched a National Solid Waste Benchmarking Study. 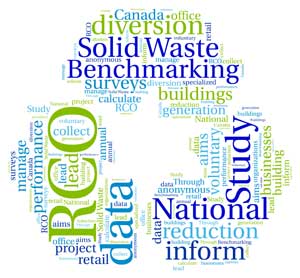 The study, established as part of the RCO’s Certified Waste Reduction and Diversion Certification Program, is designed to collect waste generation and diversion data directly from Canadian offices and retail properties.

The objective, according to program manager Meriav Even-Har, is to collect standardized data to help the sector reduce waste, eliminate cost and increase recycling. “The idea has been circulating since 2012,” she said. “Part of the 3R program awards points for qualitative and performance results, but we realized it was difficult to establish thresholds without accurate data.”

The non-residential sector of the economy is responsible for most waste production in Canada. It produces 65 per cent of disposed materials to the tune of 15.6 million tonnes every year. There has been a four per cent decline in waste production from 2008 and the diversion rate remains at about 30 per cent.

Statistics Canada, which produced the figures, reports every two to three years. However, Even-Har says the data is at least two years old when the information is released and is unverified.

Even-Har says it is focused on office and retail because that is the area of the greatest interest. “It’s much easier to work with an industry when they’ve already shown willingness. These two markets are primed and ready.”

Released in April, participants will have until the end of July to submit their data, which is both qualitative and quantitative and includes questions about the size of the building, location and existing waste management programs. Knowledge about existing practices will help identify inconsistencies that exist even within cities in waste management services, says Even-Har.

In an effort to be “accessible to everyone” the relatively simple survey has been designed to be answered in under an hour and allows participants to reply for either a single building or an entire portfolio.

“We recognize some of the people responding will have dedicated responsibility for this kind of data and will literally have it at their fingertips. For smaller buildings, though, where the responsibility would fall to someone who may wear many hats within a company, we wanted to make sure it was user-friendly.”

As part of the data collection, 20 per cent of the surveys will be randomly contacted and verified through back-up data. Results will be published in a report as aggregated data along with a detailed analysis, conclusions, and recommendations.

A prime concern for Even-Har is confidentiality, a consideration that will be addressed in part by the aggregated data. All surveys will be locked and when results are disclosed, attention will be paid to avoiding identification of properties even by inference. “If we were to report on a large commercial property in a region where only one or two exists, for instance, people may be able to identify respondents and we want to avoid that.”

Even-Har anticipates the results, expected by November, will provide mean and median diversion rates across the country and perhaps regionally where anonymity of participants can still be assured. Whatever the results, the data revealed will be the basis for further discussion. “There’s something to be said for looking at things with eyes wide open,” she said.

Even-Har says even now there are great stories to be shared. Two examples are the Cloverdale Mall in Etobicoke which is 3R Certified and the Toronto Eaton Centre, which is committed to becoming 3R Certified.

“We’re hoping to launch a series of webinars to share information, best practices and some of these great examples,” she said.

3RCertified is ‘a voluntary certification program for the institutional, commercial and industrial (IC&I) sector, recognizing organizations taking a leadership position in waste reduction and diversion, according to the organization’s website.

Beyond this study the 3R program offers self-assessment surveys that asks the questions Even-Har says should be asked to identify areas in need of improvement.

The RCO is developing a standard waste audit methodology that should be available later this summer and is “preparing a business case for waste reduction” as part of its mandate to create resources to support the effort.

Where does it all go?

Where waste ends up once it leaves the property is not well-known to building managers. A tonne of clean paper is treated differently than a tonne of contaminated paper, for example.  “As clients demand transparency and landlords become more transparent, waste providers will need to follow suit,”  Even-Har said.

The National Solid Waste Benchmarking survey is available to anyone from the commercial or institutional sectors who owns or manages an office building, retail centre or retail store.

RCO is a “not-for-profit membership based organization involved in policy, education, and project work around the issues of consumption, waste generation, reduction and diversion, and recycling.”  Its programs include pilot recycling programs, supporting the development of legislation and regulation, research, and providing information and resources.