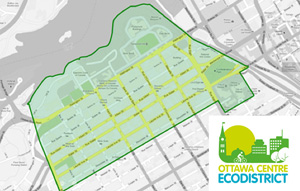 The move is expected to draw employers and residents to the core, remaking it into a vibrant residential community and destination.

The announcements came from Ottawa Mayor Jim Watson and Councillor Diane Holmes who said the city would work with community partners to develop a Sustainable Neighbourhood Action Plan (SNAP) for the core. Earlier this year, the project received a three-year grant from the Ontario Trillium Fund to help train and mentor volunteers who would help define and create the new vision.

An EcoDistrict is a neighbourhood where “property owners, businesses and organizations work together to reduce environmental impacts, generate cost savings and create dynamic social spaces. EcoDistricts have a strong community component and engage residents, employees and associations in decision-making.”

In Ottawa the initiative is the work of the Ottawa Centre EcoDistrict (OCED), a non-profit group who, according to its website, has been working “to bring together real estate developers, building owners, tenant businesses, employees, residents, social innovators, and the city in a unique collaboration focused on improving buildings, advancing sustainability practices and initiating community action.”

Executive director Don Grant says the early deliverables of OCED included creating a vision, actions and targets. Much of this has been laid out in OCED’s Business Case, developed by a steering committee that included representatives from key local organizations including Hydro Ottawa, J.J.McNeil Commercial, Minto Properties and the city.

As the business case says, “Much of the space in the core has not been renovated in the last 25 years and many commercial tenants, including the Government of Canada, are looking for green buildings as their space needs evolve.”

In an interview, Kelvin Holmes, managing director of Colliers in Ottawa, said the biggest challenge in filling vacancies is identifying what the city has to offer and then to using that as leverage to attract new companies.

Grant said the challenge in establishing an EcoDistrict lies in creating something tangible. “This has to be more than a re-branding exercise. Part of the vacancy strategy has to make the core more inviting to business. It has to create a worthwhile after-five lifestyle.”

Grant says the group will take advantage of best practice models already developed in the U.S. “Portland currently has five EcoDistricts and Washington has eight. The concept of an EcoDistrict is really a BIA (business improvement area) model that can pop up wherever it makes sense,” he said.

One of the early deliverables has been to create an inventory of properties within the core and is focused on the concept of district energy. “We are close to having a complete picture of square feet by use,” Grant said. “We’re also looking at electricity, natural gas and water data.”

Part of this stems from a plan to replace the Cliff St. Heating and Cooling Plant, which had provided heat to more than 50 Government of Canada buildings through miles of underground steam tunnels. The system had been rendered useless after a disastrous explosion in 2009.

“There is a plan to replace the old steam plant with a low temperature hot water plant over the next seven to 10 years and a plan to upgrade existing buildings to work with the plant,” Grant said.

“With pipes running along Wellington, Bay, Gloucester and Elgin, there is an opportunity for the private sector to tie in.”

The current challenge, according to Grant, is the Government of Canada cannot sell energy to the private sector so a P3 (public-private partnership) model to handle the delivery of energy from the system must be developed.

“We’ve identified 10 million square feet of property within this area that isn’t leased or owned by the government. Owners of five million square feet of that property have already said they would consider upgrading to tie into the new system as long as it was provided by a reputable third party. A large part of the rest of the space is occupied by hotels and condominiums. We haven’t spoken with all of them yet, but there is certainly potential there.”

Again, a U.S. case study for P3 energy delivery exists in OCED’s business case. District Energy St. Paul (Minn.) is a not-for-profit corporation providing district heating to 80 per cent of the central business district and adjacent urban areas and district cooling to 60 per cent. The group recently marked its 30th anniversary, an indication of the potential success of such a program.

Grant says the next steps for OCED will include bringing the city, property owners and stakeholders together for a holistic discussion about what can happen and the best way to move forward.

“Work is going on now, but in silos. If we’re to succeed at making the EcoDistrict a reality, it will be important for everyone to work together.”

Future projects will include working with partners to identify charging stations for electric cars with a long-term goal of identifying surface-level stations with signage to promote the use of the alternative vehicles. Grant says the group will be looking for a sponsor to help with the associated costs including signage.

The recent announcement about Ottawa’s SNAP initiative involves “funding partners including the City of Ottawa, Invest Ottawa, Hydro Ottawa and the Windmill Development Group with match funding from the Federation of Canadian Municipalities to be announced in mid-June. Research has already started and community consultation gets underway in May.”

Grants says the funding includes $20,000 from the City of Ottawa/ Invest Ottawa, $10,000 from Windmill Developments, $15,000 from Hydro Ottawa and contributions in kind. Funding from the Federation of Canadian Municipalities is expected to be around $97,000 when it is announced next month.

An Architects’ Vision For An InterProvincial Eco-District That Spans The Ottawa River, June 19, 2012