Canada’s largest real estate companies are far along in their efforts to cut the environmental footprint of their buildings and likely ahead of where most industry observers would expect. 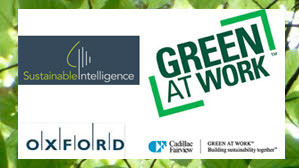 That was the message delivered by the Canada Green Building Council panel recently at the CaGBC’s National Conference and Expo in Toronto. The“Turning the Sustainability Story Inside Out: A Dynamic Perspective on What Really Matters” session provided participants Oxford Properties Group, Cadillac Fairview Corp. and Brookfield Office Properties an opportunity to outline their environmental efforts and brag a little about their progress.

Karen Jalon, director of national sustainability with Cadillac Fairview, said her company is more than seven years in when it comes to sustainability. Cadillac’s Green At Work program started in 2005 in Vancouver, became national in 2007 and has exceeded what were considered pretty ambitious targets in five years.

“We have just blown ourselves out of the water,” said Jalon. “Now we are on that next phase at Green at Work, how do we leverage off our successes, our many learnings and turn this into the next stage at Green at Work.”

She didn’t get into specifics, but said it is “very much focused on our operations and stakeholder engagement.”

“Our role is to pay pensions . . . so our green strategy is entirely aligned with that. We are interested in sustainability and what we are doing is for the purpose of driving returns . . . keeping our buildings full and keeping our customers happy.”

Oxford began its national efforts in 2008 with its Sustainable Intelligence program that detailed its portfolio’s environmental footprint and set some reduction targets. Its successes included meeting greenhouse gas, energy, water and waste reduction targets, he said.

A big part of the effort included tenant engagement efforts which include 18 “green teams” of employees across Oxford’s office portfolio of about 18 million sq. ft.

Kristina Schwartz, Brookfield Office Properties’ vice-president of operations and sustainability, was unable to attend the panel but she did provide a detailed report that was presented to the panel audience by session moderator Barbara Ciesla, Jones Lang Lasalle’s senior vice-president of occupier strategies and solutions.

Brookfield’s story is one of size, scale and geographic distribution of its buildings. Its office holdings are comprised of 114 properties in 16 cities around the world totalling about 85 million sq. ft.

Brookfield’s sustainability programs origins are quite different from those of Cadillac or Oxford. They were sparked by environmental legislation in various jurisdictions with tenant engagement following legislative trends.

In Australia, where energy regulations are extremely stringent, tenants are much more engaged in energy reduction initiatives, Schwartz noted.

Tenant requests prompted Brookfield to seek environmental certification for its Canadian office properties in 2010. To date, 10 of its 17 Canadian assets have Gold certification.

Brookfield describes energy and water retrofits in its buildings as “future-proofing against ever-rising utility and ops costs.”

Brookfield’s Schwartz noted that there is a striking divide in wants between occupants and tenant decision-makers (tenant facility managers or senior leadership). The company is looking to enhance amenities by introducing prayer rooms and calm areas which are free of advertising or video screens.

For occupiers, it all comes down to building amenities: secure bike parking, showers, on-site gym facilities, discounted transit. “However the decision-makers of the tenancies are much more interested in initiatives that reduce costs, things like energy audits, retrofits, rebates and so forth,” she stated.

Brookfield has also seen a dramatic increase in environmental awareness of issues over the past five years or so. In early surveys, there was little environmental knowledge, but the company’s 2014 tenant surveys demonstrate a high level of environmental IQ and the majority of comments are devoted to environmental requests or feedback on current programs.