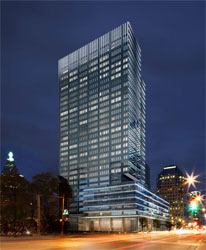 The managing director of real estate management with Oxford Properties Group Inc. was in New York a decade ago scouting office buildings with a colleague and came upon the construction site of Bank of America’s new head office.

“The hoarding told a story about the construction of a LEED building, the new headquarters for Bank of America and what they expected to get from a new LEED certified building,” he said at the recent Green Real Estate conference in Toronto.

“I thought, ‘Wow, if Bank of America for their corporate headquarters in New York thinks enough about sustainability, collaborative workplaces, the rise of the knowledge worker, all the things that we now talk about . . .  ‘ that was when I started on the journey that has brought me here today.”

McAllan, who also serves as Canada Green Building Council chairman, told attendees there is a strong connection between sustainability, corporate productivity and asset performance, and not just for new builds. “There are 68,000 commercial properties in Canada that contribute 28% of the greenhouse gas emissions,” he said.

While the business case for sustainability for new builds “speaks for itself,” the Oxford executive said he still encounters developers who are reluctant to seek LEED certification because they are presented with a “ridiculous” cost for sustainable features.

“I know exactly how that happens. That happens when you already have a design for a building and you go to architect and you go to the engineers and you say ‘How much is it to convert this to a green building?’ You may have people who don’t want to do that so you get some ridiculous number thrown out.”

A green shade of gold

He provided the example of Oxford’s new Waterpark Place III at Toronto’s Queen Quay that started out as a LEED Gold-certified building before the company came to the conclusion it had to aim for LEED Platinum. That required changes to the mechanical system and much huddling with engineers. The incremental cost, however, “was a no-brainer” he said.

That decision looks even smarter today, he said, given that LEED Gold, was well, the gold standard in North America just a few years ago, but has now been supplanted by Platinum.

The Oxford exec also warned that most tenants have a far better idea about LEED and green building standards in general than most people in the industry believe. He provided the example of a friend, a retired pharma industry veteran who was disappointed his new condo building was not built to LEED standards and therefore would not provide him with “better air quality and lower operating costs.”

Get on board or get run over

McAllan said the industry has to reach the 70 per cent level for LEED certification before regulators take the initiative. “We need it to become mainstream, and we need this to happen before there are further building codes and regulations, particularly on 68,000 existing assets. I think we need to lead on that and not have it regulated to us.”

He argued that the business case for sustainable building and retrofits is solid, particularly given a future with all but guaranteed rising energy costs.

McAllan gave the example of a recently completed LEED certification for a 590,000-square-foot office tower in Toronto with 80,000 sq. ft. of vacancy. The building, constructed more than a quarter century ago to conventional standards, was targeted for LEED EB Gold certification. Oxford estimated it would cost about $750,000 (it came in a bit lower than that). After year one following the upgrade, it produced operating savings of just over $90,000 a 15% return.

“I didn’t think that existed on that property,” he said.

“Trust me, that is going to accelerate the leasing process. Because more and more we see customers, prospective tenants, who one of the first five questions on their checklist is whether the property is LEED certified.”

He said LEED should also be viewed as “future proofing” noting that when he came to Toronto 38 years ago, window-mounted air conditioners were the standard.

As well, building developers and operators have to recognize that sustainable building features may prove to be the crucial factor in whether tenants can find and keep star employees. “The top talent market is more and more competitive than ever and the ability of us as owners and managers of real estate to partner with our tenant customers and provide them with space that enables them to attract and retain top talent is becoming more and more important.”

McAllan cited some findings from its recent study it conducted with Environics involving 2,000 office workers and links between the evolution of the workplace and environmental sustainability. Destination Collaboration: The Future Of Work found employees today expect organizations to grow their business without growing their environmental footprint.

It found that while offices are not dead, their days may be numbered: 21% of respondents preferred open workspaces and another 18% said they wanted flexibility work spaces. He contrasted that with when he started in business.

“Our No. 1 ambition was to migrate out of cubes into offices.” McAllan said. “That has significant implications for the properties we build, how we build them and the mechanical systems that serve them.”

The Oxford exec did expect more support for the mobile office, whereby people would work far less in a standard office environment. Upon reflection, the appeal of the traditional office, revamped to a collaborative, open format, made sense.

“We are basically social animals, particularly the Gen Xers, Gen Yers. They want the interaction, people want the affirmation. Thinking of the CEO of Yahoo, a huge technology-enabled company, saying I want to see everyone in the office.

“Bottom line, I think we have a great future in office space.”