Although individual buildings and properties are routinely singled out as energy-saving superstars, it has been difficult to get a clear picture as to how Canadian commercial real estate is proceeding generally in terms of running buildings more efficiently. 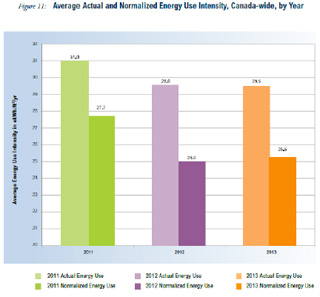 The 2014 Energy Benchmarking Report, Performance of the Canadian Office Sector published by the Real Property Association of Canada (REALpac) in February provides a national view of the industry’s energy conserving achievements by amalgamating the data from a sample of 350 buildings across the country.

The report covers the years from 2011-13 and identifies “the growth of interest and activity related to energy measurement savings as well as actual performance improvements at the building level.”

“REALpac also found the continued acceptance of benchmarking performance over time is a testament to the heightened knowledge and level of sophistication organizations are bringing to the management of their assets’ resource use.”

So what’s it say?

A key finding in the report is that normalized energy use over the past three years fell from 27.7 ekWh/ft2/yr (equivalent kilowatt-hours of energy use per square foot of building area per year) in 2011 to 25.5 in 2013. The 2013 result is actually slightly higher than the prior year but trendlines are more important, noted REALpac’s Julia St. Michael, the association’s director of research and sustainability.

“The direction is pointed correctly and fluctuations even in the best performing buildings will be seen over time.”

The improving trend bodes well when it comes to REALpac reaching its long-term goal for office buildings to achieve an energy consumption target of 20 equivalent kilowatt-hours of energy use per square foot of building area per year (20 ekWh/ft2/year).

Progress slower than hoped for

Progress may be slower than hoped for, but it is happening.

“The top 25% of all buildings is getting better over time. At one time some people may have thought that the top buildings were performing at their max (in terms of energy efficiency). What we are seeing here is the top buildings continually improve as well,” said St. Michael.

“More buildings out of the whole population are performing better every year,” said St. Michael.

“Some of the buildings that aren’t performing as well can hopefully gain some inspiration from the fact that there is a lot to be done and it is possible – and seems to be possible for more and more buildings over time.”

REALpac does not collect data on what building operators are doing to reduce their energy efficiency, but the association does have a pretty good idea what is going on building by building.

“Anecdotally, just looking over the past couple of years, building operations have been a large focus but it is not just that,” she said. “We are seeing many more collaborative efforts and activities with tenants and landlords: Race to Reduce initiative, tenant engagement, surveys. It has really blossomed.

“It is not just that people are doing the same old thing. They are doing more, and more and more.”

Not just shiny and new

The office building boom in cities such as Toronto and Calgary should also help the industry reach the 20 by 15 goal, be it 20 by 20 or 20 by 25, but St. Michael said we should not be counting on new, hopefully more energy efficient, towers to bring the average up.

She noted that reports out of New York, where the building stock is considerably older, plus REALpac’s results on energy use versus age of building, shows that older buildings can do a lot to improve energy efficiency.

“Definitely the ones being built today and to green buildings standards, should perform better, but I think that there is a tremendous opportunity for the existing building stock to up their game.

“Depending on the kind of data that you look at, and if you dig deep, building operations and ongoing best practice management of the building can probably have a bigger impact than if it is new or old.”

The 2011 Survey results show 371 office buildings with data for the calendar year 2011 while the 2012 and 2013 surveys have 277 and 279 buildings worth of data, respectively, which indicates a decrease in participation.  REALpac takes heart, however, as “the individual building metrics and Canada-wide trends illustrate new effort and enthusiasm for energy consumption measurement, monitoring, and improved performance.”

With five years of data under its belt, and next year’s coming this summer, REALpac hopes it can tease out more information from the data.

“It would be great to do a little more of a deeper dive on year over year same building trends to see if we can get some clearer relationships out of it,” she said. “We would like to look deeper into the Green Building Certification section and like I said we haven’t done any statistical analysis in any of our [data]. I think that we could add a little more rigour now that we have more data.”

REALpac is also working on a water-usage benchmarking survey that is also related to building performance.