Quebec engineer Martin Roy is one of four Canadians to earn a 2013 LEED Fellow designation from the U.S. Green Building Council.

Roy, president of Martin Roy et Associes, is the first Quebecer and one of 51 individuals granted the designation this year. Roy,  a recipient of the Grand Prix d’Excellence from the Ordre des Ingenieurs du Quebec in 2007, is also an expert in bioclimatic engineering. 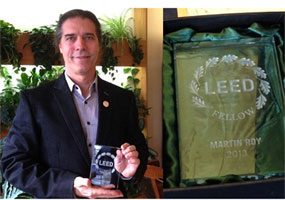 Martin Roy et Associes’ website says bioclimatic buildings are designed to take advantage of the climate and environment. Buildings designed according to bioclimatic principles can reduce the need for heating in winter and maintain a comfortable temperature in summer, the website notes.

One of the ways in which this is carried out is through a passive geothermal system, according to the example on the website.

The other Canadians who have also received the LEED Fellow designation are Mark Lucuik, director of sustainability at Morrison Hershfield in Ottawa; Robert Meredith, founder and president of Healthy Green Buildings Consultants in Victoria; and Peter Busby, manager director of Perkins + Will in San Francisco.

The designation is the highest honour LEED-certified professionals can receive and recognizes the individual’s expertise, leadership, dedication and major professional achievements, including contributions to green building.

In order to qualify for the designation, candidates must have a minimum of 10 years in green building, have gained the LEED Accredited Professional (AP) certification with a specialty and have a nomination and backing from their peers.

A committee of experts approve the nominations.

Gaining a LEED AP certification “signifies an extraordinary depth of knowledge in green building practices and specialization in a particular field,” according to the Green Building Certification Institute.

To become a LEED Fellow is to “enter an elite class of leading professionals who are distinguished by their years of experience and a peer review of their project portfolio.”

The LEED Fellow awards were handed out on the weekend at the Greenbuild International Conference and Expo in Philadelphia. The keynote speaker at the conference was former U.S. Secretary of State Hilary Rodham Clinton.