For Sun Life, sustainabilty is part of its business initiatives 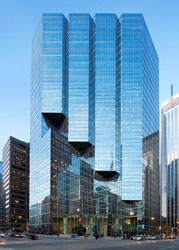 Few people would consider an insurance company the type of business that qualifies for inclusion on a list of “green” companies. Corporate Knights’ magazine, which celebrates “clean capitalism” clearly does.

For the eighth time, Toronto-based Sun Life Financial Inc. was recently named to the magazine’s Global 100, honouring the world’s most sustainable corporations. Even though the magazine is based in Canada, it truly is an international list, with only 13 Canadian companies making the ranking.

Sustainability is a top priority for Sun Life Financial according to its senior managing director Philip Gillin, who also serves as head of Canadian Property Investments and chair of the company’s International Sustainability Council.

“Integrating sustainability is part of our business initiatives, like our investments in sustainable real estate developments and renewable energy projects; and our ongoing business practices like paperless claims, payments and statements, and wireless services like our mobile app,” Gillin said.

Putting the “e” in real estate

A major real estate owner, with diversified Canadian real estate portfolio worth a little more than $5 billion (office, retail, industrial and multi-family) and another $1 billion worth of properties in the U.S. and elsewhere, Sun Life was one of the first big property owners to seriously look at improving its environmental footprint “by consuming less, by diverting more waste and by adopting sustainable building and development practices” as it states in its sustainability report.

Being a conservative insurance company responsible for payouts to generations of Canadians made such a stance logical.

“We have been thinking long-term for the last hundred years, so adopting sustainability is a logical extension of that philosophy,” said Gillin. “We are long-term thinkers and we want to be there to fulfill the promises we make to our policy holders under our financial services products. So it is very congruent with the way that we think.”

Sun Life was one of the first adopters of LEED construction standards for new developments in Canada, the executive noted, and even adopted those standards for a building constructed in the Philippines.

“It was quite a challenge for us because at the time, no one in the Philippines knew what we were talking about when it comes to LEED designation of buildings. But we brought people along, and now there are a number of other buildings that are following our lead and going to the LEED designation.”

Today, most of Sun Life’s office building portfolio were “either LEED-designed when they were built or if they were existing buildings, we adopted the LEED EB designation,” said Gillin. “Our office portfolio is probably as good as it is going to get when it comes to LEED designation.”

He added that the BOMA BeST designation has been adopted widely among Sun Life’s retail and industrial properties.

An eye to sustainability

The insurer also invests in properties with an eye to sustainability, a preference that is getting easier as environmental standards spread throughout the industry.

“We assess buildings when we buy them to ensure that they don’t have significant environmental or operational problems that could be problematic in terms of how we would run the buildings moving forward,” he said.

“We generally focus on higher-quality, institution-grade investments and generally speaking, most of those investments are well-built and if operated properly by an owner that has a sensitivity to environmental awareness, then they can be brought up to LEED EB standard or BOMA.”

Sun Life occupies approximately 2.7 million square feet of office space across Canada. In 2012, the company completed several energy- and water-efficiency projects “and achieved substantial improvements in our environmental profile,” according to its most recent sustainability report.

It also replaced two uninterrupted power supply units in its data centre, an upgrade expected to achieve energy savings of approximately 250,000 kWh per year. To cut down on lighting requirements, it reduced exterior accent lighting at its Canadian headquarters (shown in image) and upgraded lighting systems in its Toronto offices.

In 2012, Sun Life received a LEED EB Gold designation for the Mississauga Executive Centre, a four-building commercial complex. To date, 62% (by market value) of Sun Life’s commercial real estate has been awarded either a BOMA BESt or LEED EB designation.

With an investment portfolio worth approximately $100 billion, Sun Life also has plenty of opportunities to invest in environmentally friendly projects. Recently the insurer provided $140 million in mortgage financing for Highstreet, a new sustainable shopping centre in Abbotsford, B.C., being built under LEED designation. The 600,000-square-foot centre is notable for its “stacked” design.

“It is a somewhat revolutionary design,” said Gillin. “There is a Walmart on the bottom, a parking garage in the middle and at the top, there is an open-air lifestyle retail centre. It is significantly more efficient than a traditional shopping centre.”

Sun Life also operates a private fixed income group that is a leading investor in Canada to the renewable energy sector. It has lent to a number of wind farms and other renewable energy projects such as co-financing a series of solar farms in Ontario that will deliver power for as many as 10,800 homes.

The insurer is also a major financial backer of Ottawa’s LRT mass transit project which will run from east to west in Ottawa through the city’s downtown.

In addition to its Corporate Knights Global 100 ranking, Sun Life Financial was ranked first, for the second straight year,  of 244 companies in the Globe and Mail’s 11th annual review of corporate governance practices in Canada. Sun Life Financial is also on the Corporate Knights’ 2013 Best 50 Corporate Citizens in Canada list, as well as the FTSE4Good and the Dow Jones Sustainability North America indexes.