The City of Edmonton has been selected as the 2014 National Earth Hour Capital by the World Wildlife Fund’s jury of global sustainability experts. 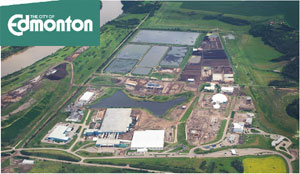 The Earth Hour City Challenge is a two-tiered event where a national capital is selected in advance of Earth Hour and a global capital is subsequently chosen. Edmonton, Surrey, B.C.,  and North Vancouver are among the 34 global finalists. It’s the second time Surrey has been shortlisted in the challenge.

Selected finalists in the challenge have demonstrated an exceptional will to transition toward a truly sustainable future. On March 27, one of the finalist cities will be honoured with the Earth Hour City Challenge People’s Choice Award in Vancouver as the Earth Hour Global City of the year.

Edmonton was selected for its variety of initiatives intended to create a more sustainable city. They include the Edmonton Waste Management Centre described on the city’s website as North America’s largest collection of modern, sustainable waste processing and research facilities. In addition there is Edmonton’s water treatment facilities managed by EPCOR, the municipally owned water utility, the light rail transit (LRT) and the double our urban forest canopy program.

Plans to design and develop a 217-hectare parcel of land that was formerly Edmonton City Centre Airport to become a sustainable, carbon neutral community, capable of housing 30-thousand people was also cited by the WWF.

Earth Hour is a worldwide grassroots movement uniting people to protect the planet by participating in a lights-off event at the same time. This year it is being held on Saturday, March 29 between 8:30 and 9:30 pm local time.

Organized by the WWF, Earth Hour began in 2007 in Sydney, Australia with the participation of 2.2 million residents and 2,100 businesses. Since then, it’s expanded globally with more than 6,950 cities and towns across 152 participating countries and territories.

The one-hour event has become a key driver of the now larger movement including the WWF Earth Hour Blue program launched in 2014.  It is an all-new digital crowd-funding and crowd-sourcing platform intended to engage people beyond the lights-off event. The Earth Hour City Challenge was a similar initiative started a few years ago.

Surrey’s ranking as a finalist in the WWF’s national Earth Hour City Challenge was aided by a compelling vision of the use of district energy throughout the city.

Surrey has a sustainability charter that sets forth an ambitious menu of changes the municipality would like to follow. They include: offering a full range of local employment opportunities and green businesses; leading the way in sustainable community design and development; and incorporating alternative energy systems.

That’s just a fraction of what the city hopes to do and while it may sound like a big task, Surrey is already actively following through on many of the sustainability initiatives.

One of those is district energy. Under the rubric of increasing energy security, Surrey has completed district energy studies throughout the city and in 2012 the city council approved the District Energy System By-law.

The by-law requires that all city centre developments of “a certain size” be fully compatible for district energy connection. The city also introduced an early adaptors’ policy that will provide time-limited financial incentives to offset certain costs.

Heat is extracted from a variety of sources such as the groundwater, solar heat, biomass digestion, waste to energy facilities, and natural gas then distributed to buildings in a dedicated pipe network. The thermal energy from the network is transferred to buildings directly, with heat exchangers or heat pumps.

Currently, Surrey businesses and residents spend $1 billion annually on energy, a cost the city says is likely to double by 2020. The city is aiming to reduce greenhouse gas emissions by 33 per cent per capita below 2007 levels by 2020.

Not counting the project pre-feasibility study and the engineering feasibility study, the capital costs came in at $35 million to connect 6.5 million square feet of buildings. To finance the project, the city used rate revenues from users, a capital financing fund, a revolving line of credit, a provincial grant and a low-interest loan.