It’s an Internet data centre with a difference.

Telus opened a new cloud computer centre in Kamloops, B.C., in late January. The $75-million facility is designed to virtually host a massive amount of information for thousands of Canadian businesses on the “cloud.” 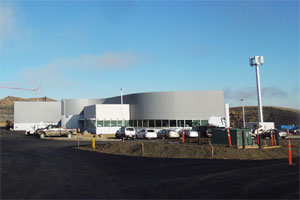 The new centre is also one of the most environmentally sustainable data centres on the planet.

Built to LEED Gold environmental standards, the centre features an advanced cooling system that makes use of Kamloops’ low humidity to consume 80 per cent less electricity and 86 per cent less water than typical data centres.

By using natural cooling from the outside air, it reduces cooling from mechanical systems to 40 hours per year. Telus says that savings adds up to nearly 2,300 tons of carbon dioxide kept out of the environment annually, or the equivalent emissions of 10,000 Canadian households.

Lloyd Switzer, senior vice-president of network transformation, said the new centre positions Telus as a leader in the field of sustainable data centres. He added Kamloops provided a prime location for the facility due to its proximity to Telus’ networks, clean power and a skilled workforce.

“The completion of one of the most environmentally sustainable data centres in the world is something all of us, especially the local community, should be very proud of,” Switzer said.

In 2012, Telus built its first sustainable data centre in Rimouski, Que. The Rimouski and Kamloops facilities have both received Tier III reliability certification from the Uptime Institute for Design and Construction, making Telus the only Canadian company with two such buildings.

The Uptime certification requires independent review and testing of the facilities against the institute’s globally recognized ratings for operational sustainability.

Information and consumer technology have a huge impact on the environment. Whether emailing, uploading a video or tweeting, devices are necessary to talk to a data centre.

“Rows of servers storing trillions of megabytes of information live in vast, energy-hungry computing complexes which power the web,” according to a Powering the Cloud infographic published by ABB, a Swiss power and automation company.

Data centres are responsible for about two per cent of global carbon emissions, and use 80 millon megawatt hours of electricity annually, almost one-and-a-half times the amount of electricity all of New York City uses, according to ABB.

Some of the biggest impacts from data centres come from their use of power, cooling and the space they take up. ABB estimates 5.75 million new servers are installed annually, yet approximately 10 per cent of those remain unused because of overly conservative capacity planning.

The energy used to power those excess servers could offset the emissions of 6.5 million cars.

Cooling the computer equipment makes up 30 per cent of the total energy usage in a data centre, while the centres themselves are massive complexes. “The world’s biggest data centres occupy over one million square feet, big enough to house 17 football fields,” ABB reports.

The modular design of both the Kamloops and Rimouski data centres is another way in which Telus has made the buildings environmentally sustainable. The design enables the telecommunications company to rapidly increase its hosting capacity while still minimizing the space the building occupies and its environmental footprint.

Google’s facility in Hamina, Finland, for instance, pumps sea water to cool the centre. The location for that data centre was chosen because of its cold climate and proximity to the Gulf of Finland.

Two of Google’s centres also use recycled water. One facility in Douglas County uses treated city waste water, while another in Belgium draws water from an industrial canal for cooling.

Beyond its data centres, Telus has a number of other sustainable initiatives at work. The company is overseeing the building or retrofitting of LEED-certified workplaces in Toronto, Ottawa and Quebec City.

And the company has a Work Styles program that enables employees to work where and when it is most convenient and productive, which helps optimize the use of office space and minimizes Telus’s environmental footprint.