The amazing 'Race to Reduce'

This is one race that really is amazing. Office buildings participating in CivicAction’s Race to Reduce are radically cutting down on energy consumption while at the same time seeing cost savings.

Not only that, but the buildings taking part in the Race to Reduce are leading the way when it comes to showcasing sustainability and how it can transform not only the workplace, but the city. 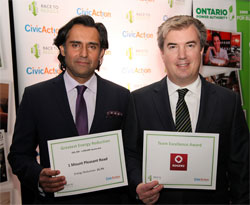 Launched in May 2011, CivicAction’s Race to Reduce challenges Toronto region landlords and tenants in office buildings of all types, sizes and ages to publicly commit to working together to reduce energy use.

Establishing goals and getting there

Buildings in the CivicAction race are attempting to reduce total energy use by at least 10 per cent over four years. It looks like the plan is working.

At the third annual Race to Reduce Awards in early December, CivicAction jubilantly announced that the landlords and tenants have reduced their collective energy use by nine per cent. That’s just one point shy of the Race’s ultimate, collective reduction goal of at least 10 per cent by the end of 2014.

Currently, 175 buildings are taking part in the challenge. Those buildings represent about 67 million sq. ft. of office space in Toronto and about a third of all the commercial office buildings in the Greater Toronto-Hamilton area.

“The beauty of having it in Toronto is most of the landlords who have engaged in the race also own buildings across North America. So what they’re learning here, they’re already applying,” said Roger Johnson, senior vice-president, Enterprise Real Estate for the TD Bank Group and co-chair of CivicAction’s Commercial Building Energy Leadership Council.

“The truth of the matter is, there are a lot of good ideas coming out of what’s going on in Toronto and that is being spread by these landlords where it is appropriate,” Johnson said.

Johnson said the speed with which they’re approaching the 10 per cent goal surprised the organizing committee. “Quite frankly, the sky’s the limit now. We hope to do extremely well in the last year of the program and blow the doors off.”

For instance, 110 Yonge Street is a 19-storey, 150,000 sq. ft. office built in 1966 and which also happens to be a designated historic building. The building underwent a complete retrofit, completed in 2012.

As part of the project, 3,000, two-lamp fixtures were switched to be more energy-efficient; motion and occupancy sensors were installed in the underground parking area and private offices to reduce hydro consumption; the building’s cooling tower had a complete upgrade.

CREIT Management L.P. and Campbell & Kennedy funded the retrofit as a capital expense item, using the energy savings to pay back the cost. The project also qualified for a $43,200 incentive.

At the other end of the scale, The RBC Building attained a double LEED Gold certification, becoming the largest and highest performing building in Canada to earn such a distinction. Completed in 2009, the building was the first million square foot office building built in the Toronto core in two decades.

RBC and Cadillac Fairview partnered on the building, which is 100 per cent leased.

TD Bank saves over a million a year

As for TD Bank, Johnson said that in the three years the company has worked with Cadillac Fairview, it’s saved more than a million dollars a year in energy use over the approximately 1.3-million sq ft. in the office tower in which he works.

Ultimately, the changes don’t just benefit the office buildings, but the quality of life in Toronto.

“Beyond the numbers, the greater achievement will be ensuring the continued market transformation of the Toronto regions commercial office sector,” said Brad Henderson, regional senior managing director at CBRE Limited and the other co-chair of CivicAction’s Commercial Building Energy Leadership Council.

The committee has also been putting together a book that other communities will be able to use without having to figure out how to build such a program from scratch. Johnson anticipates the book will be ready toward the end of 2014.

Companies honoured at the Race to Reduce Awards

A number of companies were honoured at the third annual Race to Reduce Awards event. They included Rogers Communications and Bentall Kennedy (Canada) LP and RBC for team excellence; and Cadillac Fairview Corporation Ltd and RBC received energy champion awards.

Nine other buildings were honoured for building performance for either lowest energy use or greatest energy reduction.