Since the confidence-shattering financial crisis and the recession that followed it, the thinking on green building practices has been divided into two camps: it is a nice-to-have frill that is uneconomical during tough financial times or it that it is a critical differentiator for tenants and investors that becomes even more important in tough economic times when supply is greater than demand. 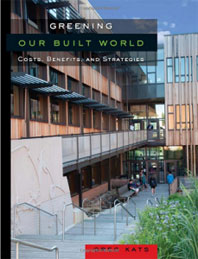 Green building researcher and investor Greg Kats, who spoke in Toronto last month at the Green Building Forum, told participants the numbers clearly indicate which camp has reality on its side.

“Today almost half of new construction, non-residential by square footage, is designed to LEED or equivalent standard. So it is a dramatic confirmation that this is really a demand-driven interest that people want to and are willing to pay a premium for.”

The Washington-based Kats, president of advisory and venture capital firm Capital E, has looked at the costs and benefits of building to environmental standards and argues the economics are compelling.

Compared to a conventional building, a green structure will reduce utility, energy and water bills by about one-third. As well, there are “measurable benefits on productivity” in the workplace with reduction of chronic conditions such as asthma or colds and flus, said Kats, author of Greening Our Built World: Costs, Benefits, and Strategies.

“When we start layering on some of the health benefits that accrue to the owner-operator as well as societal benefits you come up with a number of around 10 times larger. Financial benefits on a per-square-foot basis, net present value over 20 years compared to the upfront costs.”

He added his estimate is based on energy prices staying flat in the future, an unlikely scenario.

“If you think about energy efficiency of green design, it is really a hedge or risk reduction strategy to reduce exposure to future prices,” he said. “So when we add in those additional benefits today we are well north of that 10 times return to an investment in green buildings today which explains why green buildings have grown so rapidly in Canada, U.S. and elsewhere.”

Kats cited third-party research that found the percentage of green building development in Europe (hardly an economic powerhouse these days) has jumped significantly over the past four years. More than half of European developers say their future builds will be green construction.

“It is for 26 European countries, underlining that this accelerating growth for green buildings becoming a design norm is a global phenonmenon.”

Going green is also smart marketing, he said, noting that no. 5 U.S. bank PNC Bank designs environmental features in all its banks and is currently testing zero net energy bank branch in Florida that will become the standard for all future new branches.

“Why are they doing this? Well, when they roll out a green branch, they get coverage on television, radio and front page of the local newspaper and it drives customers to them. So that is free media exposure. Second is the preference for specific attributes such as indoor environmental quality and the third is non-attribute preference.

“That is an association of green design with things like lower risk exposure to energy prices or higher quality and also green in this climate age as being viewed as a strategy on security.”

Kats noted while climate change skepticism is a key pillar of anti-science legislators in the U.S., no less an authority than the U.S. military believes climate change is bad and is planning for it to get worse. The military’s 2014 quadrennial review warns of worsening weather that will aggravate world tensions and make its job as global policeman that much tougher.

“The U.S. military was one of the first organizations to adopt green design before we released LEED formally and basically all military construction today is green, because they understand the benefits.”

Just as it makes sense for building owners, countries that focus on low CO2 growth strategies will do better than those who stick with traditional methods, said Kats.

“What we are seeing on a global scale is that economies that become more efficient, including using green design, are not only more resilient, they have higher economic growth.”

He cited economic projections for U.S. electricity consumption for building out to 2030 that shows flat to falling usage, which is a combination of green building construction, economic slowdown and energy efficiency investments.

“That is about $4.5 trillion in savings. So when someone says to you a low CO2 strategy, a strategy that behaves responsibly to our children and grandchildren, is going to cost more, that ain’t the data, guys.”