Just in time for Earth Day on April 22, the Toronto-Dominion Centre demonstrated that commitment to achieving green goals can make a tangible difference by enhancing the workplace environment for tenants and conserving natural resources. 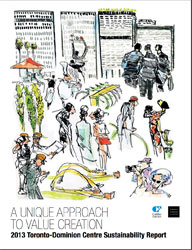 Its second annual sustainability report details achievements across the board in waste diversion and reductions in energy use, greenhouse gas emissions and water consumption. Making a connection between night-time energy use and cleaning staff, the centre has taken people off the night shift, improving their quality of life.

“Sustainability is at the core of everything we do, every decision we make,” TD Centre general manager David Hoffman said in a statement released in conjunction with the report. “It’s not a band-aid or an afterthought. It is essential to the way we create long-term value for our tenants and support them in their business objectives.”

Reflecting its 2013 initiatives and performance metrics, the report also details the company’s efforts to support and enhance the tenant experience, breaking down successes based on the four cornerstones of business: financial capital, human capital, real capital and brand capital. The value of these cornerstones for the 75 tenants and 21,000 or so employees who spend their days at the 4.3 million-square-foot, six-tower, six-acre centre is the real achievement.

According to the report, financial capital is defined as enhanced profitability including cost containment. In 2013, the TD Centre increased its waste diversion efforts by 12.3 per cent. This translated to 4,475 metric tonnes of waste diverted, the equivalent of the annual waste from 360 Canadian homes. Besides natural resource conservation and reduced greenhouse gas emissions, this creates a savings on waste handling costs as materials are diverted from landfill.

The human capital cornerstone is described as enhancing human health and productivity and well-being through areas such as education and awareness. One of the centre’s initiatives – the Green Council – is a tenant advisory steering committee which drives the Occupant Engagement Program. Composed of senior representatives from some of the centre’s largest tenants, its goal is “driving engagement and conservation through occupant behaviour change” by prioritizing initiatives and advising on program direction and future occupant campaigns.

Another component is reflected in that more than 50 per cent of tenants now use daytime cleaning services, saving night-time energy consumption and also improving the lives of cleaning staff.

The third cornerstone, real capital, refers to enhancing the workplace environment through improvements to physical performance and operating capabilities.

“We’re showing that by linking sustainability efforts to these cornerstones we can provide a business environment that contributes to the success of our clients,” Hoffman said in the statement. “In doing so, we’re also showing how one of Toronto’s most recognizable modernist landmarks, built in the 1960s, remains on the cutting edge not only through its design but also through its management and operations.”

The final cornerstone, brand capital, is intended to enhance reputation, customer loyalty and employee retention. TD has fully grasped the concept and is taking it to new levels.

The importance of brand capital is also reflected in the numbers of business schools emphasizing the strategy to students as they prepare graduates for this new consumer and employee demand.

A testament to its success, the centre has been awarded the 2013 NAIOP REX Green Award. TD’s report notes this is the first time the Commercial Real Estate Development Association Retail Excellence Award has been presented to an operational program instead of to a development project.

The award recognizes “excellence, innovation and achievement in the area of sustainable real estate projects or practices, initiatives, processes and/or community contributions.”