Toronto about to get a whole lot greener

The City of Toronto recently announced an update to the civic green standard which will apply to all new development applications submitted after Dec. 31.

The updates place more stringent standards on the likes of energy efficiency, bird-friendly building designs and guidelines for increasing the city’s tree canopy.

The expanded, voluntary Toronto Green Standard, a two-tier set of environmental performance standards that promote sustainable development in the city, is also being aligned with the LEED Canada program for new construction and Waterfront Toronto’s mandatory green building requirements.

Tier 1 is the minimum level of environmental performance required for new development. Tier 2 is a voluntary set of higher standards, that offers a 20 per cent development charge refund as an incentive for extra green buildings. 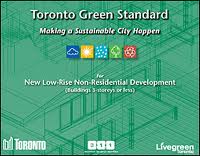 The green standards includes changes as diverse as new policies for exterior claddings to new guidelines for improving Toronto’s tree canopy to better reflect a new tree planting calculation. The latter links canopy growth to soil volumes and allows for the distribution of trees across a larger area, including both the private development site and the public boulevard.  The goal is to increase the city’s tree canopy to 40 per cent.

In 2010, Toronto made bird-friendly design mandatory in all new developments subject to site plan approval. A review of the performance metrics led to a new adjustment in the measures.

New research, for example, shows that a denser visual pattern on the building exterior is more effective for preventing bird collisions. According to the report, that change – and an adjustment to buildings’ exterior glazing – are expected to work better with a variety of building types.

Toronto’s  Tier 2 green standard for energy usage in low-rise residential was set  at the Energuide 83 level, a 15 to 20 per cent improvement over the mandatory Tier 1 EnerGuide 80 standard. (EnerGuide is a Government of Canada initiative that rates the energy consumption and efficiency of new houses and other consumer items.)

An external advisory committee of experts on the EnerGuide and EnergyStar protocols set the target, which will apply to low-rise buildings such as townhouses, and subdivisions where the project contains five or more units.

The most contentious proposed change pertained to energy efficiency and greenhouse gas reductions. The city wanted to introduce energy efficiency that would have been five to 15 per cent higher than the requirements the Ontario Building Code introduced in 2012.

However, the proposal met with opposition and lobbying from a number of groups. That, in part, led to the city’s decision to adjust the EnerGuide ratings, as well as to hold the line on changes to the standards for mid-to-high rise residential buildings as well as to institutional, commercial and industrial structures.

Since the standard came into force on Jan. 31, 2010, the city has reviewed and applied the Tier 1 standard to 346 multi-unit residential buildings; 187 institutional, commercial and industrial buildings; and 108 low-rise buildings or subdivisions.

The Toronto Green Standard has received accolades including the Federation of Canadian Municipalities Sustainable Communities Award.