Canada has two entries in the U.S. Department of Energy’s Solar Decathlon, a biennial event in which 20 teams compete to build the best solar-powered house.
Team Ontario is made up of students from Ottawa’s Carleton University and Algonquin College, as well as Queen’s University in Kingston.

Team Alberta is comprised of students from Calgary’s Mount Royal University and the University of Calgary.

Both groups are made of up more than 100 students from a variety of disciplines who have spent about two years designing and building solar-powered homes they say can generate as much energy as they use.

Most teams are from the United States, but others come from as far as the Czech Republic and Austria are to have their houses judged on their efficiency, affordability and general esthetics.

A Canadian team have never won the American-dominated competition, but Germany’s Technische Universität Darmstadt finished first in both 2007 and 2009.

This year’s event is being held in Irvine, California from October 3-13.

“There is no prize other than the pride of winning,” said U.S. Department of Energy spokeswoman Christina Kielich, who added that past Solar Decathlon participants have been five times more likely than other students to move on to careers in the clean-energy field. 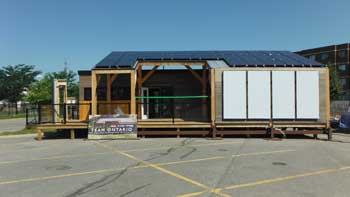 The ECHO has 30 solar panels on a sloped roof facing south, which the team says is capable of producing up to 7.8 kilowatts of electricity. This roof extends as a cover over a spacious deck and is angled in order to provide shade and reduce the need for cooling when the sun is high in summer but allow in light to offset heating needs when the sun is lower in winter.

The house is equipped with a weather station that takes into account outside conditions for automations such as to determine whether open windows or the cooling system is the most efficient cooling method, and to adjust settings for optimal shade placement.

“You can actually set it and forget about it,” Gary Johnson, solar lab manager at Queen’s, said of the ECHO’s automated climate controls.

Team Ontario’s house is sealed with vacuum insulation panels that help create an insulation value of R-55, or twice that of a conventional home.

The homes are meant to be affordable for a typical homebuyer.

Jacob Morgan, a housing student at Algonquin College and Team Ontario’s construction manager, said the market value of ECHO would be about $300,000.

“We want this to be the prototype when it starts to change,” said Morgan, predicting a time when energy efficiency becomes a more crucial market feature of homes.

The Ontario government chipped in $80,000 toward Team Ontario’s entry.

“The main purpose of the competition is to demonstrate that net-zero solar homes are feasible, affordable and desirable,” Ontario Energy Minister Bob Chiarelli said at ECHO’s Aug. 17 unveiling.

“The students participating are the next generation of professionals who will truly transform the energy sector.” 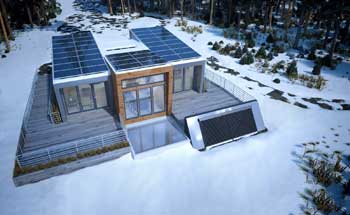 Team Alberta’s house is called Borealis, named after the northern lights and the boreal forest that covers much of Canada. It’s a 900-square foot bungalow that comes in three modules that can be detached for easier mobility.

“It makes it really easy to ship this house to remote regions, which is our target market, for working professionals to live in,” said Alexandre Ste-Marie, Team Alberta’s project manager and a business student at the University of Calgary.

Borealis uses 20 solar panels and can produce 10 kilowatts of power, Ste-Marie said. He added that it comes with an insulation rating of R-40, thanks to “state-of-the-art BASF Walltite Eco, Version 3 spray foam. . . . It’s essentially the best spray foam you have on the market.”

Ste-Marie explained that the house is designed ideally for two roommates, which would be common in a remote industrial setting, as opposed to families. The two side modules each include a bedroom and “flexible space,” that can be used for an assortment of purposes, such as an office. The middle module includes common spaces, such as the bathroom, kitchen, dining area and mechanical room.

The house features a “living wall” in the bathroom, made up of plants, and sustained largely though the sunroof. It helps to dehumidify and detoxify the air, taking pressure off the ventilation system.