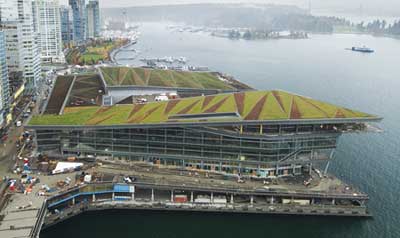 “Cities are increasingly leading the way with bold solutions to confront the urgent challenge of climate change and Vancouver is fast emerging as a global hub for innovation in green design,” Robertson said.

The award particularly recognized two ambitious targets and related strategies Vancouver has set for itself. (The green roof on the Vancouver Convention Centre is shown in the image).

The first target requires all new buildings constructed from 2020 on to be carbon-neutral. The second is to reduce energy use and greenhouse gas emissions in existing buildings by 20 per cent compared to 2007 levels by 2020.

The city has set out building bylaw and energy efficiency retrofit requirements to aid in achieving those targets.

Approved in 2011, Vancouver’s Greenest City 2020 Action Plan includes a goal “to lead the world in green building design and construction.” As of July 2010, all building rezonings within the city are required to meet Gold LEED standards for environmental performance.

The plan is an ongoing document and is regularly revisited at city council. In September, the city announced the 2014 version of the Vancouver Building Bylaw, in which beginning in March new one- and two-family homes will have to meet new energy efficiency requirements.

Those include improved insulation, air-tightness and high-efficiency heating.

Thomas Mueller, president and CEO of the Canada Green Building Council, said in a statement that more than 60 per cent of carbon emissions in Vancouver are associated with buildings and homes.

“The plan takes bold steps towards reducing energy use in buildings along with water use and increased recycling targets,” Mueller said.

Winners from other countries

Abu Dhabi in the United Arab Emirates received a regional leadership award for its Estidama Pearl Rating System. The program brought in mandatory sustainability regulations in a city that previously had none.

Christchurch, New Zealand was the recipient of the Urban Regeneration Award for various policies and initiatives around a sustainable rebuild in a city devastated from earthquake damage.

The Climate Action Leadership Award went to Seoul, Korea. The city received the award for its One Less Nuclear Power Plant initiative that spans three years and is meant to reduce energy consumption in that city.

ICLEI – Local Governments for Sustainability and UN-HABITAT sponsor the prestigious international awards program. An expert panel of judges from ICLEI-International, UN-HABITAT and the World GBC chose the winners.