Ivanhoé Cambridge’s focus on modernizing older buildings in its portfolio has paid off with a LEED Silver certification in the Existing Building: Operations & Maintenance category for World Trade Centre Montreal from the Canada Green Building Council. 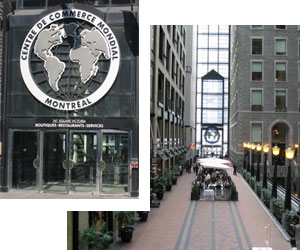 The real estate subsidiary of the Caisse de dépôt et placement du Québec has owned the unique structure situated between old Montreal and the downtown core since it opened in 1992. World Trade Centre Montreal spans an entire city block that consists of several restored historic buildings under a glass roof. The multi-purpose complex houses a variety of boutiques, restaurants and services as well as the offices of around 50 companies from different industries.

The 1.18-million-square-foot property recently underwent a major heritage refurbishment of its facade on Saint-Antoine Street and many other enhancements that led to it obtaining its LEED Silver certification, including:

World Trade Centre Montreal received a BOMA BESt level four certification (the highest designation a building can receive) from Building Owners and Managers Association of Canada for its sustainable development efforts and achievements in 2013.

World Trade Centre Montreal also won a Leaders in Sustainable Transportation Award in 2013 for encouraging employees to use alternatives to their cars. It provides 125 bicycle racks and a fleet of self-service bikes. There are two locker rooms with showers for those who cycle or jog to work.

The complex has joined forces with the Communauto car-sharing program and there are six electric vehicle charging stations in the parking garage.