Eleven organizations are calling on the federal government to improve the energy efficiency of Canadian buildings. The organizations, ranging from think tanks to architecture and builders’ associations, say the improvements are needed to help the country meet its 2030 climate target set out in the Paris Agreement. 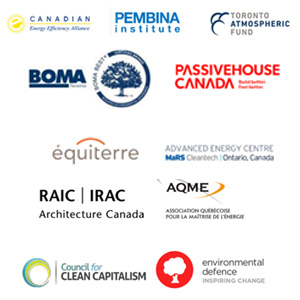 “We thought it was really important to make some statements in this area where we believed greenhouse gas [emissions] could be reduced. We’ll end up with better places to work and better homes,” said Elizabeth McDonald, president and CEO of the Canadian Energy Efficiency Alliance.

The groups say that the total energy consumption of Canadian homes and buildings accounts for nearly a quarter of the country’s greenhouse gas emissions and that the emissions of old buildings must be significantly reduced. At the same time, new buildings will have to be designed for ultra-low emissions.

In order to achieve this goal, the organizations outlined in a letter to the Jim Carr, the Minister of Natural Resources and Catherine McKenna, the Minister of Environment, ‘a bold national action plan for energy efficient buildings‘.  It outlines a number of steps that they believe must be taken.

The organizations propose a ‘clear vision for the future of ultra energy efficient/low carbon buildings’ that would lead to “deep” energy retrofits along the lines of 25 to 50 per cent of 30 per cent of the country’s existing buildings by 2030. They also call for all new construction to be nearly zero energy by 2030.

In order to do this, the groups see, among other things, the need for reliable, comparable data for energy and water use in homes and buildings along with a skilled, trained workforce; updated national building codes; and strategic financial support through things such as revolving loan funds or loan guarantees and the potential use of tax credits to stimulate retrofitting.

The groups also call on the federal government to lead by example, noting that it owns or occupies over 27 million square metres of floor space. They maintain the government should benchmark and disclose its public building performance, require new publicly owned buildings to be built to near zero energy, and upgrade existing ones through retrofits.

Despite the complexity and size of the group’s plan, McDonald believes the reductions in greenhouse gas emissions through the changes to Canada’s building sector are achievable. “All of us are very reasonable about what can be done,” she said.

According to McDonald, some important decisions will be made over the next few months as Canada tries to put together its action plan on climate through the First Minister’s meeting in the fall.

From her perspective McDonald sees federal-provincial interaction as one hurdle to overcome. “To try and to be coherent and bring it all together in a way that’s reasonable both for the provinces and for the federal government is, in essence, the biggest challenge.”

Jennifer Cutbill, an architect and regional director for British Columbia – Yukon for the Royal Architectural Institute of Canada – one of the signatories to the letter – said the action plan is to help the federal government set ambitious goals.

“These are gnarly, complex problems,” she said. “They can’t be solved in silos. They can only be solved by people really stepping up, taking this leadership role and working together to make it happen.”

Tom-Pierre Frappe-Seneclauz, a senior advisor with the Canadian think tank, the Pembina Institute – who convened the signatories to the letter – acknowledges that attempting to shift an entire industry to a different standard of construction presents some real challenges. “We don’t want to minimize the effort,” he said.

At the same time he pointed out that a fair amount of “high performance” building already exists, such as passive house construction, particularly in the West and a number of LEED-certified buildings.

How to get past the start-up stage

Frappe-Seneclauz rhetorically asks, how do we take this early adaption wedge and make it more common so it’s no longer just the signature buildings being certified LEED or built to passive standards? “That’s really the challenge and we think it’s totally doable in 15 years. It will take some dedicated effort.”

He notes that the idea of using building codes to drive high performance energy efficiency is new however that is changing.

The City of Vancouver, for instance, has issued an ambitious policy for its buildings, calling for civic buildings owned and erected by the city to achieve a target of reduced emissions 90 per cent below 2007 levels by 2025. By 2030, any and all new construction in the city are mandated to achieve zero emissions goals.

The Pembina Institute was one of a number of public and private agencies that the City of Vancouver consulted about its plan.

Frappe-Seneclauz said a shift away from building codes that work for everybody all the time, to codes designed with steps in them, progressing from rezoning to a baseline for construction that would help move new policies ahead much faster.

According to the architects association’s Cutbill, bold vision, codes, incentives and leading by example are all imperative to making the transition to a low-carbon reality. But for her the crux of the plan is the ability to measure and understand performance and to create “responsive feedback loops for continuous improvement.”

Who’s going to pick up the bill for all this? McDonald suggests carbon taxes levied against emitters could help subsidize the initiative, but in some cases consumers will end up paying too.

“There’s no question. Rate-payers will pay in some ways,” McDonald said.