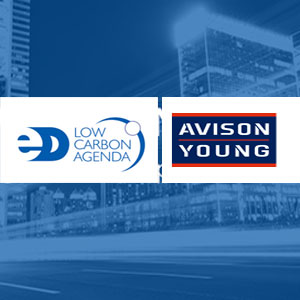 The low-profile CII has a high profile mission: make Canada’s real estate industry a leader in the drive towards a low carbon economy. Considering that commercial real estate plays a major role in carbon emissions, it’s a tall order.

“This can’t be just beacon projects and then people walk away,” explained Andrew Bowerbank, global director of sustainable building services at EllisDon and the founder of the CII.

While net zero energy buildings are on the group’s to do list, the effort’s ambitious goals go well beyond construction of low-carbon trophies.

“How do we prove to the companies that are engaged that we can make money at this, because at the end of the day in order to tip a market toward what the feds want and even what the international markets want, the companies involved have to pay salaries, pay businesses ongoing (costs) and keep the lights on, and so we have to showcase that the stuff is actually going to work.”

In addition to Avison Young, the industry group has added heavyweights that include BASF Canada, the Cement Association of Canada, Cisco Systems, Cricket Energy, Enbridge Gas and WSP Group.

EllisDon’s Bowerbank said there are a number of other key companies that the organizers of the Carbon Impact Initiative is looking to add to its ranks of corporate backers.

“We are talking to a lot of different groups. My main thing is I want to make sure that they are either some of the largest companies in Canada or influential in the market already. If that name is recognized those are the kind of companies that we are bringing on.”

“We are not doing this like an NGO with a big membership. We are taking our time and new companies are coming in.”

Adding Avison Young was an easy call. “We needed a good corporate real estate leader and Avison Young definitely fit that bill. They have been involved with green buildings in Canada and around the world for a long time and this is a really good fit for them to come on board with us.”

Avison Young chair and CEO Mark Rose stated that “A key part of this effort involves helping our clients reduce their carbon footprints. But our goals also include helping the commercial building sector manage its emissions responsibly for years to come.”

While the CII does not have ambitions to become an established organization with swanky downtown offices and a team of full-time employees, it does have an ambitious game plan and goals that can be boiled down to four action items:

1. Build/retrofit the next generation of buildings and infrastructure to meet and surpass new performance standards;

2. Develop a method for those in the industry to offset the footprint that building development, construction and operations incur;

3. Through research, testing and verification, facilitate rapid industry adoption of chosen strategies; and

4. Through investment and collaboration in Ontario, create economic opportunities connected to low-carbon approaches.

Talk, like carbon, is plentiful and cheap. Results, though easy to measure, are harder to produce.

“Unless you have people in industry actually pulling the trigger on these (carbon reduction) commitments building this stuff, we are not going to get any further ahead.”

The quartet of CII’s action items “are designed to demonstrate the effectiveness and practical response strategy” required in tomorrow’s low-carbon economy.

“I don’t think people realize what it is going to take to build to net zero energy especially with large commercial buildings.”

The low carbon drive will not succeed without the support of various levels of government, Bowerbank said. Ontario has taken an early lead role to financially back its net zero energy projects. “Building to LEED Gold is pretty easy these days but if we want to move to net zero energy what is that added cost and can the province help out with that a bit. I think that is real value for taxpayers that if we are going to get into a carbon tax market and carbon priced market, let’s start [building] for that.”

The first of the 10 proposed net zero projects on the CII list is already underway: the 90,000 sq. ft. Centre for Partnership & Innovation on Mohawk College’s Hamilton, Ont. campus.

The EllisDon-led project is officially the first pilot project registered under the Carbon Impact Initiative.

Although it is getting its start in Ontario, CII is intended to be a national effort and discussions are underway with other governments in the country.

Bowerbank, a former executive director and CEO of the World Green Building Council, joined EllisDon with an environmental mandate and has been working on the Carbon Impact Initiative much of that time up to its launch this past June.

EllisDon recognized it had to up its game if it was going to reach the international standards given the strides that have been made in places like Europe and Asia where hyper efficient buildings are seen as the new standard of excellence.

“That is really where Geoff Smith our CEO wants to push things. How do we become real beacon leaders in the Canadian marketplace and beyond?”

Given the strong start, a slate of projects and new additions such as Avison Young, he doesn’t expect the CII to lose momentum.

“There is no going back now, it is going pretty quick.”>