British Columbia’s commitment to the green building market is accelerating at a rate that would likely surprise even the keenest of observers, Vancouver’s Board of Change heard at a recent panel discussion. 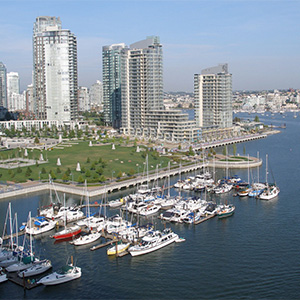 Three Vancouver-area municipalities have adopted the new B.C. Energy Step Code, and many more are considering it. The code is the latest initiative to encourage green building and property management practices. (Wikimedia)

“I don’t think anyone in this room can perceive of how rapidly [the sustainable building market] is changing in a very significant way in B.C.,” said panelist Sean Pander, Vancouver’s manager of green buildings. “I don’t think you would want to change it any faster than it is already happening.”

He was speaking in Yaletown in February on a panel focused on how governments, designers, builders and residents are dealing with the evolution of green building policies and initiatives.

The event was hosted by the Board of Change, a business network which fosters balance in commercial sustainability, social responsibility, and profitability.

The panelists agreed more red tape needs to be removed to allow for more green construction, and increased cooperation is required with designers, builders and residents to boost understanding about green buildings. But measurable progress is being made here.

“We saw both the province and the federal government set really ambitious and important requirements looking to all have all building codes within Canada and B.C. be at net-zero energy, ultra-efficient levels by 2030 or 2032,” she said. “Currently, we’re not building at that [level].”

Part of that response in B.C. has been the recent approval of the Energy Step Code. It’s a voluntary provincial standard launched in April 2017 which uses tiered criteria to improve on building codes to construct more energy-efficient buildings.

The code establishes measurable, performance-based, energy-efficiency requirements for construction of residential and commercial buildings. Municipal governments can adopt these measures through their own policies and bylaws using various incentives such as density bonuses.

Other green building programs including Passive House and Energy Star can be incorporated into the Step Code.

Vancouver is the only city in B.C with its own building code and has been meeting elements of the Step Code through its own Greenest City Action Plan 2020 and Zero Emissions Building plan.

“Many of the things you see now in the Step Code, we’ve been doing since 2009,” Pander said. “Since the Fall of 2016, the city has been requiring Step 3 [criteria] of the Step Code with the greenhouse gas limits. We’ve already got over 30 buildings now that are being designed and getting ready to be built to Step 3 of the Step Code.”

In Vancouver, the weighted average of greenhouse gas intensity of a new building in 2007 was 21 kgs of carbon dioxide equivalent emissions per metre squared, Pander said. “In 2017, we’re already down over 40 per cent in emissions.”

The costs of green building

But costs studies have shown the Step Code changes to be reasonable, Wark said. “Going up to Step 3 for example, the marginal cost is about 1.5-to-2 per cent as a maximum over current construction costs.”

She said the main issue is the learning cost. “What does it cost to learn how to do these new approaches? The real trick there is to work collaboratively with the building industry, with designers . . . around those first one or two projects.”

Wark said a new paradigm is needed to think about green building costs and savings. She said her neighbour bought a Vancouver bungalow which had been built in 1929.

“When he bought it, the building inspector said ‘you’ve got to know there’s actually no insulation in this building’.”

The buyer replied that, since people had been living in the house for 90 years, it couldn’t be that uncomfortable.

“Turns out it was bloody uncomfortable,” Wark continued. “The heating would go off and at night he would be underneath his duvet and he would feel the wind going from one side to another.”

Over the decades, various aspects of the house — carpets, appliances, decor, finishing — had been upgraded.

“The one thing that wasn’t changed was the building envelope — the thing that was making that house so uncomfortable and also expensive to heat,” she said. “It’s really worth doing it right the first time.”

One of the leading programs in Vancouver has been Passive House, which focuses on designing and building a better building envelope to reduce energy consumption and heating demand.

The application has been shown to reduce heating demands of a home in Canada by 90 per cent when compared to the national average for a non-Passive House home, said panelist Sandra Rohler, a Passive House designer and architect at Cornerstone Architecture.

Passive House is already being used to construct houses, condos and apartments and various commercial buildings in Vancouver, she said.

In fact, 20 per cent of rezoning applications in the City of Vancouver are now Passive House projects, making the city one of the early adopters in North America. “It’s happening, which is great,” she said.

“Vancouver now requires all city-owned and all affordable housing agency projects to be Passive House certified, or if it’s an unusual building typology, we may look at another zero-emissions building code,” Pander said. “We’ve already got nine city facilities, either starting construction this year or starting design this year to the Passive House standard.

“In Vancouver, we have over 1.2 million square feet of new development moving through city permitting that will be built to the Passive House standard,” he said.