The Canada Green Building Council will unveil its Zero Carbon Buildings Standard  publicly at its Build Lasting Change Conference May 31-June 1 in Vancouver. 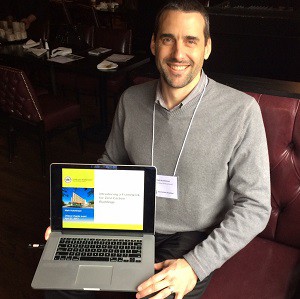 The document is the result of more than 18 months of work led by Mark Hutchinson, the CaGBC vice- president of green building programs.

At a breakfast event in Ottawa last week, Hutchinson provided an outline of the initiative for more than 70 industry professionals.

The first step, he explained, was actually defining a “zero carbon building.”

“We defined a zero carbon building as a highly energy efficient building that produces, on-site, or procures carbon free renewable energy in an amount sufficient to offset the annual carbon emissions associated with the building’s operations,” he said, noting some Canadian building sectors have made great strides toward such a goal in the past few years.

From 2010 to 2014, 22 per cent of commercial  and nearly 30 per cent of institutional buildings achieved a LEED certification.

“The market penetration is quite dramatic for a voluntary program. It is exceedingly rare that you would ever see that,” Hutchinson said.

“Those LEED projects are having an impact that you can actually quantify and measure. First and foremost in greenhouse gas reductions, our LEED-certified buildings saved over a million tonnes of CO2 as of last year’s data.

“We now have over one square metre of LEED certified space for every Canadian (there are more than 36 million of us),” he said. “I think that’s fantastic.”

The program was born after the Paris Agreement in 2015, when 197 countries pledged to help keep the rise in global temperatures below a 2-degree Celcius threshold to prevent what the scientific community believes could become runaway climate change.

Simply put, increased carbon in the atmosphere from burning fossil fuels is a major source of the problem. Because sectors such as aviation and manufacturing are unlikely to achieve the massive carbon emissions cuts needed to stop the atmospheric buildup, buildings must play a large role.

And, data shows, it’s a sector where massive gains can be made for relatively little cost.

That led the World Green Building Council to set two standards: that all new construction would have a “net zero” carbon footprint by 2030, and all buildings be net zero by 2050.

“Not only is the total savings from buildings larger than from industry and agriculture,” Hutchinson explained, “but the more cost-effective stuff is by far larger than what we see in other industries.”

To create the standard, Huchinson’s team consulted with more than 50 stakeholders from government to academia to utilities, plus 40 institutions. They also researched North American and international programs designed to reduce the environmental impact of buildings, from construction to operations through the full life cycle.

“We want these buildings not only to be energy efficient, but also to be low carbon,” Hutchinson said.

That means including factors not previously considered. One example is buildings in Quebec which run on “clean” electricity generated by the province’s massive hydro dams. There is no carbon from the power itself, but building the dams had a significant ecological impact.

Hutchinson said combining energy efficiency and clean energy generation via on-site or local grids is a key facet of the standard. That’s one reason carbon offsets are not a preferred option.

“Establishing the connection between the renewable energy and the buildings is very powerful,” he said. “The reason we have carbon footprint with the building operations is because they are using energy that isn’t necessarily all renewable.

“To the extent that we can encourage them to create more renewable energy, we are solving our own problem, as opposed to carbon offsets. You are not directly improving your own situation for the long term (with purchased offsets).”

In areas where this is simply not possible, Hutchinson said Renewable Energy Certificates can be substituted.

The standard recommends tracking and reporting on several metrics:

At this point, the standard seeks transparency in reporting, which will offer an opportunity for building owners and developers to learn from what others are doing. As a result, it is not setting targets in areas such as peak demand / grid interaction.

“This is something we want to understand and have more collective information so we can analyze it,” Hutchinson said. “Expose it so other people can see how your building is performing and compare and learn from that.”

The next step for CaGBC will be a pilot program involving about 18 buildings across Canada. They range from offices and schools to MURBs and warehouses, and in size from 2,000 to a million square feet.

With its cold climate, Canadian building owners and managers face stiffer challenges than those in more moderate climates, but Hutchinson said by incorporating the three principles of the low-carbon design pyramid it can be done.

“First and foremost, reduce the need for energy in the first place. That means passive design. Then, once you’ve done what you can there, make sure you’re operating as efficiently as possible.

“The last piece, for your energy needs, make sure it is clean energy.”