Canada to get its first net-positive energy office building 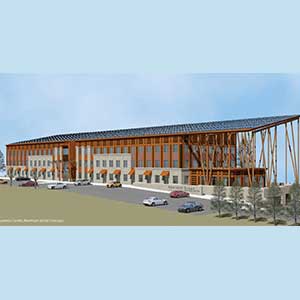 Howland Green Business Centre, on Cachet Woods Court near Highway 407 and 16th Avenue in Markham, Ont., at the marketing stage of development, will produce more energy than it uses, says the builder.

de Sylva calls it “the first net-positive office building of its kind in Canada, and nothing short of a landmark achievement and giant ecological leap forward for the environment and the building industry.

“If you can be net-zero or close to net-zero, it shouldn’t be too big a deal to go net-positive,” said de Sylva.

The new entity, Howland Green Homes Ltd, has a mandate to build beyond net-zero energy and Howland Green Business Centre is its first development.

The three-storey, 59,000-square-foot Howland Green Business Centre will be powered by the sun and geothermal energy. The commercial/office condominium will feature several innovative features, including:

* an enhanced insulated concrete formwork that will have a combined thermal resistance value of at least R40, which is far in excess of any other standard;
* R80 roof insulation, which is approximately four times greater than the building code;
* windows designed with new technology in fibreglass construction and Low E argon gas with resistance values as high as R9, which exceeds typical triple-glazed windows;
* high-efficiency LED lighting, with motion sensors where applicable;
* the latest geothermal technology to heat and cool the building with automatic load sharing and individual office controls;
* a rooftop photovoltaic array to capture approximately 420,000 watts of solar energy and generate about 515,000 kilowatt hours of energy, leaving no footprint and helping to offset the carbon footprint of others, as the operational demand for the entire building will be approximately 430,000 kilowatt hours;
* one of the first electric potential lithium-ion and pneumatic systems to store generated energy and use it when it’s needed, as opposed to when it’s available;
* and an innovative water recycling system that’s designed to harvest all rainwater and recycle it on site.

“If you can make a difference at the end of your building, the global footprint is reduced. That makes your building positive.”

The construction of Howland Green Business Centre should start in late May or early June. Howland Green will move its offices into the building, and de Sylva expects to be occupying it a year from now.

Howland Green Business Centre will have a retail value of $22.5 million, according to de Sylva. Marketing of the condos has just begun and more marketing materials will be issued in the next week. Spaces will range in size from 667 to 20,000 square feet. About 25 per cent of the space has been committed to by undisclosed entities, and de Sylva expects the entire building to be spoken for in three months.

By using less energy per square foot than any other office building, de Sylva said Howland Green Business Centre will be able to keep its condo fees low.

Howland Green’s second development will be a residential condo called Bronte West in Milton, Ont. near the recently expanded Milton District Hospital. It will use similar technology as Howland Green Business Centre and feature 132 large suites averaging between 1,200 and 1,300 square feet.

Bronte West should go on the market in late May or early June, with construction expected to begin by next January. Suites will range in size from 849 to 1,616 square feet, plus balconies, with prices starting at $379,990.