Dunrobin offers a model for community solar in Canada 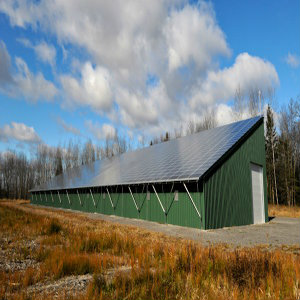 A large-scale project in rural west Ottawa is quickly becoming a model for community solar.

The roof of a large storage facility near the village of Dunrobin features an installation of 1140 solar panels capable of generating 250 kilowatts.

The facility is designed to help power a nearby high school and subdivision.

The installation is a partnership between the Ottawa Renewable Energy Coop (OREC) and the Windmill Development Group, a green real estate company in Ottawa. Each owns 50 per cent of the $2-million project, which recently held an open house to showcase the facility.

“We wanted to build our capacity to launch larger developments and this was the perfect match,” said OREC director, Roger Peters.

The Dunrobin storage facility is the coop’s biggest energy producer to date.

Jeff Westeinde, project partner and founding partner of Windmill, said: “This is our first partnership with a community-based initiative on a solar project like that.”

Westeinde said the project plays an important role in the community through local investment.

Dunrobin can power 9,039 computers for a year

According to Janice Ashworth, OREC’s general manager, the project was significant in a couple of ways. It helped OREC learn the ins and outs of the industry working on such a large installation, and at the same time gave them a link into the green real estate sector working with Windmill.

OREC anticipates doing more projects with Windmill, but isn’t ready to announce anything yet.

The Dunrobin facility has the capacity to power 9,039 computers for a year and the potential to offset 1,087 metric tons of carbon emissions.

Dunrobin was contracted under the first round of Ontario’s feed-in-tariffs, for which the Ontario Power Authority pays a rate of $0.713 kilowatt hour for the electricity produced.

OREC has paid dividends to members every year since 2012

While community renewable power coops are new to Ontario, they’ve proven successful in Europe with over 50 per cent of Germany’s renewable power generated from cooperatives or farmers.

OREC partners with local property owners to use their land or rooftops for community-owned, renewable power projects. The coop enters into a 20-year lease agreement with the owners.

Residents of Eastern Ontario can join OREC and invest in renewable power generation though the purchase of securities. The securities provide the capital to finance the projects, which are usually wholly-owned by OREC, although some projects are co-financed through joint venture arrangements.

OREC members can purchase between $2,500 and $250,000 in securities, which predict an annual return on investment in addition to a full repayment of capital over a 20-year period.

Ashworth notes the direction of the industry is moving toward net metering. Net metering takes electricity generated on a property and uses it for that particular property, instead of trying to sell the power back into the grid.

The economics of net metering are possible now because the prices of installing the solar panels has dropped, making the cost of that electricity on par with electricity from the grid.

“It’s a different model that might be more attractive to certain businesses who want to be buying electricity from solar, but don’t have the capital necessary to invest up front,” Ashworth said. “That’s the kind of collaboration we’re building right now.”

Some of its projects include the Union Lofts in Toronto and Cathedral Hill in Ottawa. The former is a repurposed church containing 40 residential units. The latter are luxury condominiums targeting LEED Platinum.

Windmill is also the developer behind the controversial Zibi project, a mixed-use development on two Ottawa river islands that has attracted protests from First Nations people who consider the land sacred.

The development has also received criticism for using the One Planet Living certification, which isn’t seen to be as stringent as other models such as LEED when it comes to measuring sustainability.